Welcome to Reach and Teach 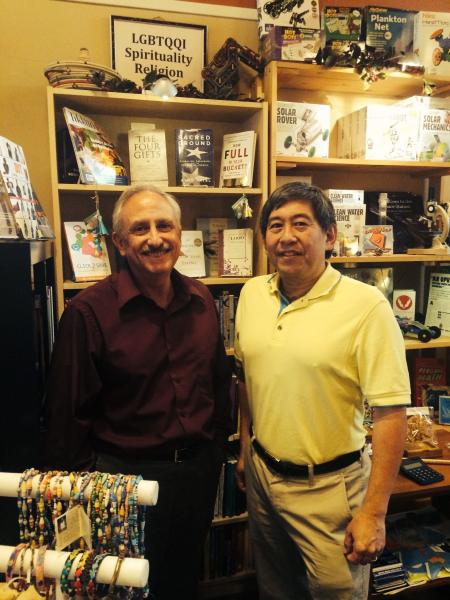 We are San Mateo's independent bookstore and shop for unique products that transform you and the world. Everything at Reach and Teach is focused on Gender Equality, Sustainable Living, and Peacemaking. We offer books, toys, puzzles, games, green lifestyle products, teacher resources, and fair trade gifts for all ages.

Our store is open for in-store browsing. Plus we offer curbside pickup and if you live within a 5 mile radius of our store, we are happy to personally deliver your order to your door at no charge. You can also order online through this website.

One of the key things people tell us they love about our store is how we work directly with each person to find just the right thing to match their needs, especially when they are looking for gifts. We're HERE for you by email anytime or give us a phone call during our regular business hours and check out our photoblog Reach and Teach NOW!

KEEP UP WITH US  AND VIEW OUR DAILY SPECIALS AT FACEBOOK.COM/TRANSFORMWORLD

FIND US ON YELP

Read the Terms and Conditions for Using Our Web Site (there, our lawyers are happy)

About Reach and Teach 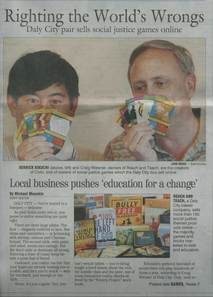 Located in San Mateo, California, Reach And Teach is a peace and social justice learning company dedicated to transforming the world through teachable moments. Our co-founders, Craig Wiesner and Derrick Kikuchi, launched Reach And Teach in 2004 as a subsidiary of their award-winning educational consulting company, WKMN Training, LLC.

Derrick and Craig traveled to El Salvador in 2000, visiting and working with the people in Communidad Octavio Ortiz. There, they learned the stories of people who had lived through the horrors of civil war, torture, assassination, and the ever-present voices and weapons of "Norte Americano" soldiers who supported the Salvadoran government. Despite the damage inflicted on these people and the pain they endured, they welcomed their American friends into their homes, fed these guests their best food, gave up their own beds, and showered their guests with complete hospitality, kindness and love. These people who had so little gave so much to visiting strangers.

In that community seeds were planted that began to grow inside Craig and Derrick, moving them deeper into a quest for a more peaceful and just planet. Derrick became more deeply involved in border justice (California/Mexico) and Craig began speaking out about the violence between Israelis and Palestinians. September 11th brought war with Afghanistan and soon after the Taliban fell, Craig and Derrick were asked to be part of an interfaith delegation to Afghanistan to bring together people who'd lost loved ones on September 11th with Afghans who had lost loved ones, been injured, or lost homes in the war that followed. 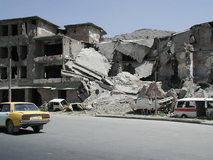 The scenes of destruction and the stories of those who suffered, died, lost loved ones, were horrible. The realities of war could not have been made more clear. Black and white became gray, over and over again, as the mixture of stories about the horrors of the Taliban blended with the horrors of cluster bombs and bunker busters raining down on innocent men, women and children. Yet once again, amidst the blood and tears, hospitality and love were abundant. Wherever the delegation went, all were welcomed with open arms and whatever food and drink could be found. Jews, Christians, Muslims, and Buddhists, were honored guests in the rubble of homes, offices, mosques, and schools. 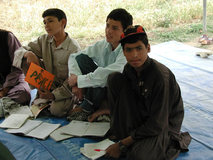 The delegation had been arranged by Global Exchange, a San Francisco human rights organization, and one of the requirements for going was that you had to promise to speak about the experience anywhere and everywhere you could for up to one year after returning. Craig and Derrick spoke in schools, libraries, community centers, churches, and on TV. Their two hour presentation included incredibly powerful stories and stunning photos as well as clear calls to action for ways to help the Afghan people and others caught up in war.

On the day before the Iraq invasion in 2003, they were invited to speak at Palo Alto High School's "International Day." While most of the parents and teachers organizing that day wanted it to be completely upbeat, one teacher felt that the students needed a place to talk about and deal with the fact that the country was about to go to war again. Craig and Derrick shared the stories from Afghanistan and also talked about what was about to happen in Iraq. They filled two classrooms twice, with standing room only. The kids paid rapt attention and asked powerful questions.

After the second presentation, as Craig and Derrick were leaving, a young man came up to them to thank them for the presentation. He then said "I don't know what you two do for a living, but whatever it is you should stop. This is what you need to be doing. This is how kids like me need to learn about the world."

He walked away. As they put their stuff in the car to leave, they knew he was right and that they needed to change from being part-time peacemakers into full-time....... what? The idea for Reach And Teach was born.

Today, Reach And Teach creates and distributes books, games, puzzles, toys, curriculum, posters, music, DVDs, and other products that help to transform the world through teachable moments. Reach And Teach is a treasure hunter, searching the planet for that special something that mainstream bookstores won't promote. Whether the products come from a non-profit or a small publisher, we see our job as making sure that great content can be found under one virtual roof.

We're dedicated to helping parents, teachers, grandparents, community organizers, youth leaders, and all people, from infants to raging grannies, to know that they can make a difference in the world and to provide them with the tools to do so.

Derrick has been deeply involved in peace and social justice issues through his work as a Presbyterian Elder at the First Presbyterian Church of Palo Alto. He has been on the board of directors for Northern California Presbyterian Homes and the Council of Churches Santa Clara County. He was an editor for Open Hands, an ecumenical quarterly journal on LGBT inclusion in communities of faith. He has traveled to El Salvador, Mexico, and Afghanistan on peacemaking and solidarity delegations and often lectures on theology, church history, economic justice, and peacemaking.

Derrick currently serves as an ordained elder at the First Presbyterian Church of Palo Alto where he and Craig were married 32 years ago in the first same-gender marriage in the church's history.

Craig has been deeply involved in social and economic justice issues and the peace movement for the last 20 years. He is a member of the steering committee for Multifaith Voices for Peace and Justice, a Bay Area interfaith peace organization. Craig has been a frequent contributor to the KQED radio perspective series and is a prolific writer whose opinion writing has appeared in the San Jose Mercury News, the San Francisco Chronicle, the San Mateo Daily Journal, CommonDreams.org, the Christian Science Monintor, DemCastUSA, and the letters sections of Newsweek, and the NY Times.

Craig currently serves as a San Mateo County Commissioner on the LGBTQ Commission, the first such commission to have been formed in California. In his role as a commissioner Craig has spoken at dozens of events, recommended legislative changes at the county and state level, helped raise $2 million dollars in funding for the County Pride Center, worked with the Board of Supervisors to sign onto an Amicus Brief to the Supreme Court in a landmark case that recognized that LGBTQ people are protected by the Civil Rights Act of 1964, and for the last two years has participated in county-wide efforts to make Covid testing and vaccines available to everyone. 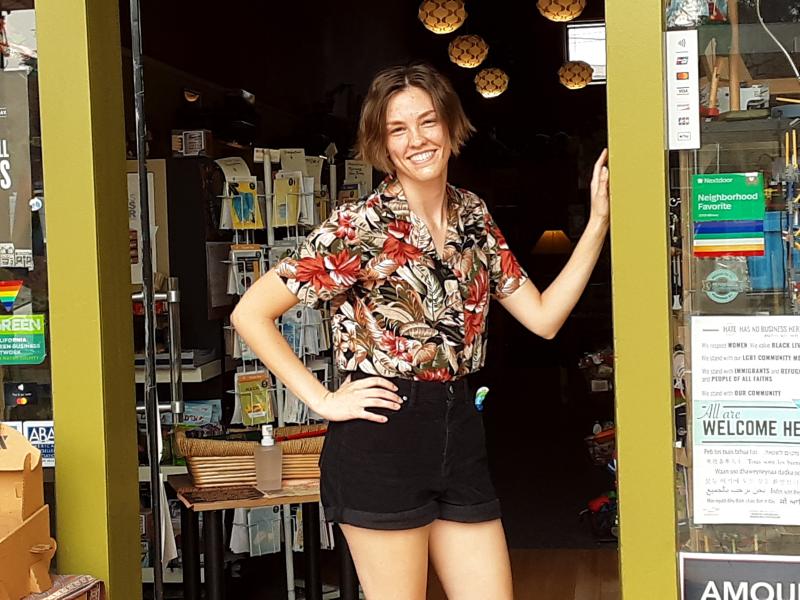 Reach And Teach in the News

Reach And Teach was honored to be selected for the Sustainable  San Mateo Award in 2014. BACIPIX, a terrific video company, created this video about us which was shown at the awards dinner.

Our Advisors consist of parents, clergy and other interfaith leaders, activists, teachers, university professors, psychologists, business professionals, and school administrators from across the United States. In order to ensure diversity of input, we've selected advisors from a broad range of schools including Title 1 schools, public schools in more affluent communities, charter schools and private schools. We are also advised by University Professors specializing in K-12 education as well as leaders within non-profit organizations with education as a component of their missions.

If you would like to be an educational advisor, please let us know!

Please click to learn more about our accreditations with the California Green Business Program and Green America.