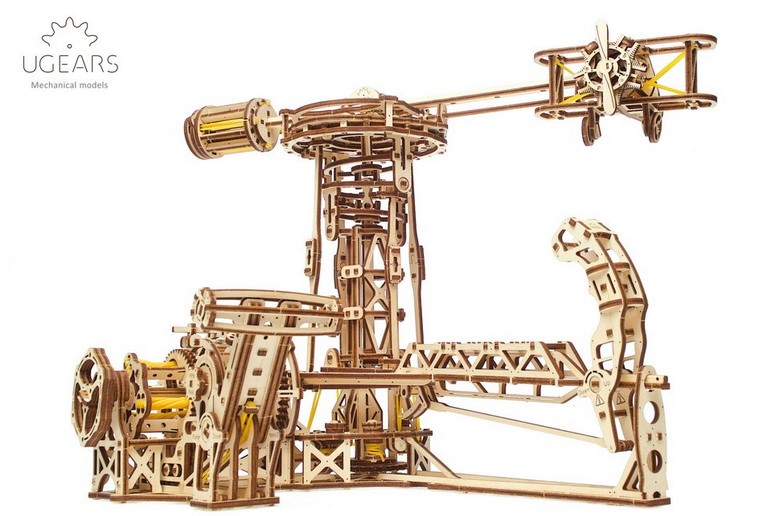 Do you fly in your dreams? Do you like the feeling? Once again Ugears makes the dream come true reaching out to the sky with its first ever aircraft model represented by two flying machines in one package. Introducing – The Aviator model.

The model has three modules: the airplane, the helicopter and the flight control tower. Choose between your aircraft, set one on the tower’s bar and you are good to fly. As a beginner pilot you might want to start with the helicopter which is not as difficult to control as the airplane. Easier to manipulate but no less exciting, your chopper has a cockpit with doors that open and shut, and three-blade main and tail rotors.

The airplane has a higher velocity and requires a certain skill to operate. This module is based on the wire-braced biplane and has a 5  piston motor. To learn how to fly this wayward bird you may need several flight hours – but it is of course part of the fun! Besides, you would have already become acquainted with the basics if you started with the copter.

However, your cockpit is the control tower, a sophisticated device with a high-performance motor that powers the rotation of the swash plate with the bar – with an aircraft on one side and balance weight on the other.

The control tower is operated with two control bars:

- the control column regulates the roll and pitch of the flying machine;

- and the Motor controller to adjust RPM (revolutions per minute) sets the speed of the aircraft.

Fine tuning ensures the proper operation of the swash plate.

When all three units are assembled and you are ready to dive into the sky, it is time to wind up the motor. Make sure you don’t overextend the rubber bands in the motor – maximum winding must not exceed 25 half-turns. Hold on to the control column while releasing the Motor controller’s lock to launch your model.

The Ugears Aviator model kit is made of high grade wood and has everything you might need for assembly.  The quality of the parts is top-notch: a laser method is used for cutting items from a plywood board that provides precise hairline cuts. The details have to be pulled out of the boards and assembled to create a complete model. Like all other Ugears models, the Aviator comes with step-by-step, full-color, truly easy to follow instructions in 11 languages and requires neither glue nor special tools to be fully assembled into functional flying model. 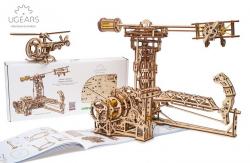