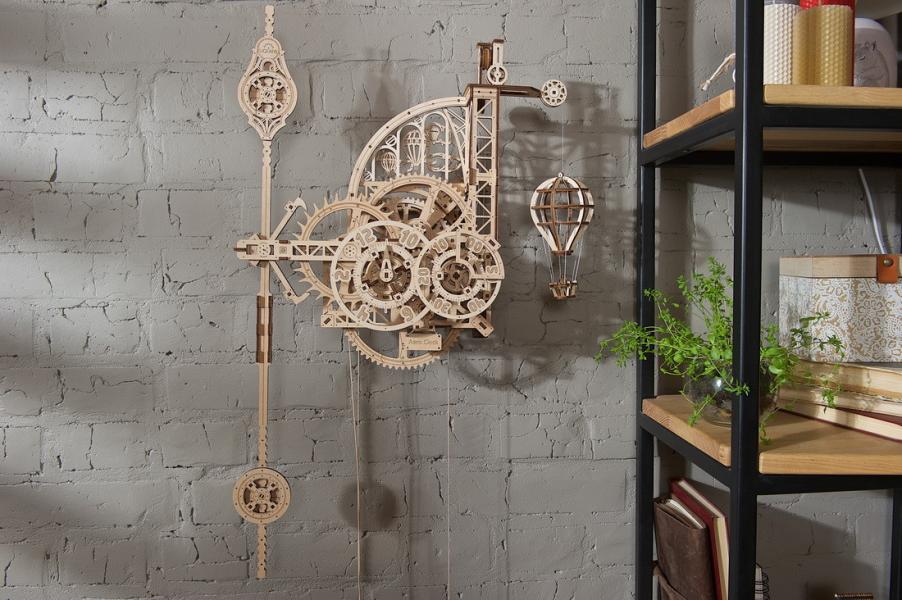 The Aero Clock isn't just a 3D wooden mechanical model, or a pretty showpiece. The Ugears Clock is an actual working clock that you can build yourself, mount to a wall, wind up, then watch as the seconds, minutes, and hours tick by. The Aero Clock is an ingenious puzzle and DIY clock mechanism, unlike any other clock. It is a lovely piece of precise engineering that reveals the workings of a weighted pendulum clock to builders and viewers alike.

This simple-yet-elegant Ugears clock is driven by the force of gravity pulling down a weighted bag (you can fill the bag with sand or salt). Raise the bag on its pulleys to wind the clock. As the weight slowly descends, it rotates a drive gear, which then rotates an escape wheel through a reducer. The clock features an adjustable weighted pendulum which interacts with the escape wheel through the steady tick-tock of the anchor mechanism. You can adjust the clock's ticking action to the second, by sliding the pendulum's top and bottom weights. The reducer also transmits rotation to an hour disc and a minute disc. One of the interesting features of our Aero Clock is that time is not read with rotating hands on a clock face, but rather a fixed pointer indicates time on the slowly-rotating, numbered hour and minute discs. Moreover, these discs rotate counterclockwise—did you know that before standardization, some clocks moved clockwise while others moved counterclockwise? In the role of "cuckoo” the Ugears Aero Clock features a model hot air balloon. The suspended balloon rapidly descends when the hour strikes, then slowly rises again over the course of the next hour.

As you build the Aero Clock, a wooden wall clock with pendulum, you will learn the basic principles behind clockworks, how the steadying influence of a swinging pendulum operates through a rocking anchor, locking and unlocking the gears on an escapement one second at a time, thereby regulating the (slow) descent of a weight as it drives both power gears and timekeeping gears. 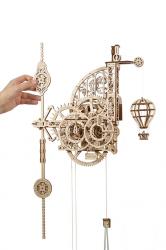