A map that not only shows true size comparisons, but also turns the world upside down to challenge North-South perceptions. Based on the popularity of the Peters concept of equal area, we produced a similar map, the Hobo Dyer Projection, which offers less elongation than the Peters map but more compression at the poles. This is the map that President Jimmy Carter used to display his agency's efforts at his Nobel Peace Prize ceremony in December 2002.

This new map belongs to the family of Cylindrical Equal Area projections in which the latitude and longitude lines form a rectangular grid. Other projections in this family include the Lambert, Gall, Behrmann, Edwards and Peters. The HDP retains qualities of the other equal area cylindrical projections, but is more visually satisfying.

Commissioned by ODT, Inc., created by British cartographer, Mick Dyer, the map was derived by modifying the 1910 Behrmann projection. Behrmann placed the standard parallels at 30° north and south. On the HDP map, the "cylinder" is assumed to wrap round the globe and cut through it at 37½° north and south. In order to preserve the equal area property the shapes of the landmasses become progressively flattened towards the poles, but shapes between 45° north and south are well preserved.

Due to the unusual proportions of the new map, ODT also printed eight other map projections for comparison purposes on the border of the map. The reverse side of the HDP map shows the exact same projection, but with two somewhat startling changes: south is on top and Australia is shown in the middle of the map. How does such a simple thing as reversing the poles or changing the "centering" influence your impression of what's important? 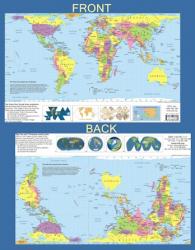