It took us a few years to catch on to the folks at Blue Orange with their "Hot Games Cool Planet" tag line and finally try a few games out and gosh, what were we waiting for????? This one is a lot of fun and, of course, that's really important, but we also needed to know that the company is really "green" (and they are) and that the people manufacturing the products are treated well, paid well, and working in decent conditions (yep - they are). This one's a lot of fun and we're glad to have finally picked up the phone and called Blue Orange (and they were incredibly nice when we called).

Oh yeah... when I unpacked the first game (Craig here), I called Derrick over and challenged him to a round. Less than two minutes later, I won. Now, anyone who knows what a genius Derrick is can imagine how good that made me feel. Of course I didn't challenge him to a second round. (He learns fast.)

Gobble up, line up and win! Gobblet is the Award-Winning, Fun Game of Strategy. As easy as Tic-Tac-Toe, Gobblet can be learned in a few seconds and is fun to play again and again. Beautifully crafted, Gobblet is entirely made of wood and includes a great box with self-storage for all pieces. With irresistible fast moving play and astonishingly simple rules, Gobblet is a fun game for the whole family! 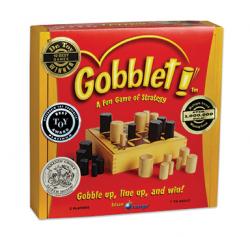