Essential Mysteries in Art and Science

Myrrh (AKA Trudy Myrrh Reagan), with her bright circular abstractions, “portholes into the unknown,” interprets a dozen different realms of science. In her new book, Essential Mysteries in Art and Science, she elaborates on the science behind the paintings in a dozen well- researched essays about these realms.

The friendly aspect of this book is its visual appearance. The first section is an art book, presenting Myrrh’s Essential Mysteries series of vivid paintings. The second section is a charming personal account of the artist’s encounter with science, illustrated with her other science-related works, together with many small illustrations that support points in the essays.

This has been Myrrh’s 50-year project. She began as a “newbie” married to a physicist, picking out patterns in nature to use in her work. She soon fastened onto the powerful ideas in science, those that define the outlines of the cosmos in which we live. “As I changed, so did science,” she says halfway through the book. It includes several sections on the explosion of interest, beginning in the late 1980s, in complex, dynamic, and chaotic phenomena. As well, she explores questions under investigation and those that are simply enigmas. In an age where cultural ideas and branches of sciences themselves are silos that do not communicate well, hers is an account that gracefully relates them all. 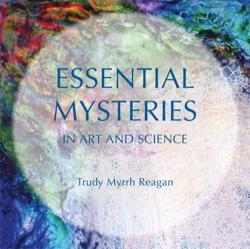