Equal Area Map of the USA

Reach And Teach is proud to offer these 22" wide two-sided laminated desk maps which can help answer some very important questions (with actual, not alternate facts).

The task of cartographers is to produce map images of the world and its countries that are accurate and understandable to anyone who might use their creations. It is a task that is challenging indeed, and for no country is this challenge as readily apparent as it is for the USA.

Here are the issues:

The first issue in making ODT’s new map of the USA was to make it an equal area map for all the USA’s four territorial components: the 48 adjoining states, Alaska, Hawaii and Puerto Rico. A realistic image of the geographical extent of the USA would have to show each component and piece of territory at its true area. Otherwise, the map user would be given a distorted idea of the country.

This principle might seem self evident, but every other map of the USA has compromised on this base-line to give prominence to the older 48 states, relegating Alaska (shown as a small fraction of its actual size) and Hawaii (often shown larger than its true area) as tucked away insets that are incompatible with the scale of the main map, while Puerto Rico is usually omitted altogether. The results of these practices are maps that provide the map user with a badly distorted idea of the real USA: Hawaii is imagined larger than reality, Alaska’s size is vastly underestimated, and Puerto Rico is entirely forgotten. The 48 adjoining states assume the role of the part of the USA that matters.

Moreover, the map user acquiring information from traditional maps has very little idea as to how the territories making up the USA are related to each other. How many people would quickly answer that Alaska is the northernmost and westernmost state of the union and that Hawaii is the southernmost? How many people realize that Alaska is far and away the largest state of the union? It would certainly be understandable if they were unsure of these geographical realities, given the inadequate map images of the USA available to students and the general public.

The inadequacies of current maps portraying the USA provided a challenge for any map publisher capable of recognizing the problem and bold enough to do something about it. This challenge was taken up by Bob Abramms of ODT, publisher of the best-selling Peters equal-area world maps and other innovative map products for our changing times. A cartographic team was assembled comprising Bob, who took responsibility for the overall map concept and general editing, award-winning cartographer Len Guelke, whose primary role involved the preparation of several draft maps and the final product, and internationally-recognized map author and cartographic consultant Dennis Wood, who advised the project on aesthetic and cartographic issues. We tried to follow the principles outlined in Wood’s Power of Maps. Additional artistic input was provided through the various stages of development by graphic designer, Frances Lassor, and visual artist, Mona Naimark.

ODT’s map of the USA seeks to provide an accurate picture of the size and location of each element of the USA at the largest scale possible. The complete map comprises four panels: one panel each for Alaska, Hawaii, and the 48 adjoining states (with an inset for Puerto Rico), and a fourth panel for a geographical overview of the entire USA, showing how its parts are related to each other on the surface of the earth. The panels are arranged in a way that is as true to the geographical realities as is possible. Thus, the Alaska map panel is placed west of the 48 adjoining states and north of Hawaii. The use of panels results in a map of the USA that maximizes the scale at which all its parts are represented by avoiding the inclusion of vast areas of sea and foreign countries, which would occur if one created a single map of the entire USA.

This decision to map all the states at their true areas using a panel approach provides the key to appreciating the distinctive qualities of the ODT USA map. The remaining cartographic decisions were of lesser import, but important nevertheless. These decisions mainly involved issues of map content, symbolization and color. On content the overriding principle adopted was to ensure the map’s panels were clear, clean and uncluttered. The key elements that were mapped were chosen on the basis of this principle and included state boundaries, important cities and towns, major rivers and lakes, shaded relief and principal highways. Symbols were selected on the basis of simplicity and ease of recognition and colors were chosen to provide a pleasing, harmonious overall image highlighting all the states of USA and differentiating it from neighboring countries. The creation of the map involved several hundred iterations of various shades of color, using “drop-outs” for text (versus black lettering), and the symbol designations for capitals and city sizes.

The decision on exactly what constituted an “important city” involved considerations of political importance, population size and regional prominence. All national and state capitals are included and clearly symbolized as stars. Other cites were selected based on their metropolitan populations and included all the major population clusters with over one million inhabitants. These metropolitan entities were named after their most prominent city, and clearly symbolized as red squares. Smaller cities were included, as space permitted, on the basis of their populations and regional importance. This approach gives a geographical perspective to the map by emphasizing that a small city has a regional importance in a sparsely settled area that cannot be measured by its population alone.

The ODT Equal Area USA map also includes two scales measured in square miles rather than providing a traditional linear scale. This innovation emphasizes the fact that area is the fundamental unit shaping the nature of human activity on the face of the earth. Distance is the key element for the traveler; area is the variable that shapes our lives as inhabitants of the planet. Human activity on the surface of the earth involves area whether we are thinking about urban sprawl, crop production or intensity of recreational activity. Maps that represent areas accurately are essential if we are to have a realistic conception of the countries we inhabit and how they are situated on the face of the earth.

The cartography by Len Guelke was executed using ESRI’s Arc Map (version 9.1) software. This software included copious data on the USA and neighboring countries and most importantly had a wide choice of projections on which these data could be portrayed, including Lambert’s Equal Area projection which was selected for all the map panels. This projection not only provided the sought after equal area property, but it also preserved good shapes, allowing the components of the USA to be mapped at their correct earth areas with very little shape distortion.

Len received regular feedback over a ten month period from Bob Abramms and Dennis Wood, who critiqued several draft maps with the goal of ensuring an innovative final product of the highest quality. Each individual decision (the size of the symbols, thickness of the borders between countries and states as well as whether or not to use “rules” outlining the map panels) had to be balanced with the artistic impact they had on the image as a whole. Our goal was to have a highly effective tool for teaching and learning about the USA, balanced with our desire for an attractive desktop map.

Some of the technical hurdles/obstacles that needed to be addressed over the various stages of the map’s development included:

There is no map that can do everything. The ODT map of the USA is designed to present a 21st century view of the country in which the map user can see at a glance the configuration of states, their location relative to each other and neighboring countries, their capitals, important cities, major lakes, rivers, mountain ranges and highways at a scale appropriate to the objectives of the map. The map was designed with the primary purpose of teaching USA geography to students in grades 3 through 6. The black and white outline map on the reverse side of the color map is highly effective for classroom drill and student self-study. The black and white outline maps are also provided as free downloads.

The higher the grade level, the more appropriate it is to have students identify all the capitals and major cities, as well as begin to ask more penetrating questions about map capabilities and limitations.

After the map was finished, but before we went to press, ODT formed strategic alliances with two other publishers, because their recently-published USA history books formed a perfect complement to ODT’s new USA map. Schools who purchase a minimum of 50 laminated USA maps, or 100 paper USA maps, will receive a set of free books while supplies last: Howard Zinn's A Young People’s History of the United States (two volume set) and James Loewen's Lies My Teacher Told Me: Everything Your American History Textbook Got Wrong.  We strongly urge USA history teachers to consider adopting these books.

A set of highly sophisticated and thought-provoking questions is also posted on line. These make the map intriguing and challenging for advanced students (high school and above) as well as adults. The more you study this equal area map, the more things “pop out” and surprise you. 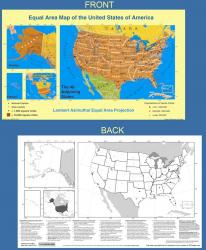