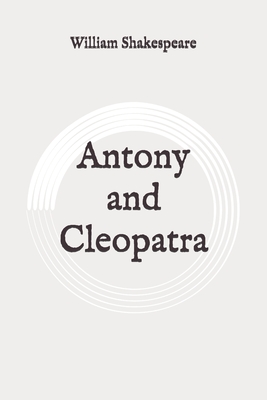 Mark Antony, one of three rulers of Rome, is in love with Cleopatra, Queen of Egypt. Antony is summoned back to Rome, where he clashes with another ruler Octavius before returning to Cleopatra in Egypt. Now in battle with Octavius, Antony and Cleopatra suffer losses and miscommunication, and both eventually commit suicide.A magnificent drama of love and war, this riveting tragedy presents one of Shakespeare's greatest female characters-the seductive, cunning Egyptian queen Cleopatra. The Roman leader Mark Antony, a virtual prisoner of his passion for her, is a man torn between pleasure and virtue, between sensual indolence and duty . . . between an empire and love. Bold, rich, and splendid in its setting and emotions, "Antony And Cleopatra" ranks among Shakespeare's supreme achievements.SCENE IAlexandria. A room in CLEOPATRA's palace. Enter DEMETRIUS and PHILO]PHILONay, but this dotage of our general's O'erflows the measure: those his goodly eyes, That o'er the files and musters of the war Have glow'd like plated Mars, now bend, now turn, The office and devotion of their view Upon a tawny front: his captain's heart, Which in the scuffles of great fights hath burst The buckles on his breast, reneges all temper, And is become the bellows and the fan To cool a gipsy's lust.Flourish. Enter ANTONY, CLEOPATRA, her Ladies, the Train, with Eunuchs fanning her Look, where they come: Take but good note, and you shall see in him. The triple pillar of the world transform'd Into a strumpet's fool: behold and see.CLEOPATRAIf it be love indeed, tell me how much.MARK ANTONYThere's beggary in the love that can be reckon'd.CLEOPATRAI'll set a bourn how far to be beloved.MARK ANTONYThen must thou needs find out new heaven, new earth. Enter an Attendant]AttendantNews, my good lord, from Rome.MARK ANTONYGrates me: the sum.CLEOPATRANay, hear them, Antony: Fulvia perchance is angry; or, who knows If the scarce-bearded Caesar have not sent His powerful mandate to you, 'Do this, or this; Take in that kingdom, and enfranchise that; Perform 't, or else we damn thee.'MARK ANTONYHow, my love CLEOPATRAPerchance nay, and most like: You must not stay here longer, your dismission Is come from Caesar; therefore hear it, Antony. Where's Fulvia's process? Caesar's I would say? both? Call in the messengers. As I am Egypt's queen, Thou blushest, Antony; and that blood of thine Is Caesar's homager: else so thy cheek pays shame When shrill-tongued Fulvia scolds. The messengers MARK ANTONYLet Rome in Tiber melt, and the wide arch Of the ranged empire fall Here is my space. Kingdoms are clay: our dungy earth alike Feeds beast as man: the nobleness of life Is to do thus; when such a mutual pairEmbracingAnd such a twain can do't, in which I bind, On pain of punishment, the world to weet We stand up peerless.CLEOPATRAExcellent falsehood Why did he marry Fulvia, and not love her? I'll seem the fool I am not; Antony Will be himself.MARK ANTONYBut stirr'd by Cleopatra.Now, for the love of Love and her soft hours, Let's not confound the time with conference harsh: There's not a minute of our lives should stretch Without some pleasure now. What sport tonight?CLEOPATRAHear the ambassadors.MARK ANTONYFie, wrangling queen Whom every thing becomes, to chide, to laugh, To weep; whose every passion fully strives To make itself, in thee, fair and admired No messenger, but thine; and all alone To-night we'll wander through the streets and note The qualities of people. Come, my queen; Last night you did desire it: speak not to us.