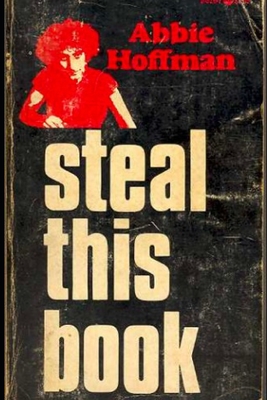 It's perhaps fitting that I write this introduction in jail- that graduate school ofsurvival. Here you learn how to use toothpaste as glue, fashion a shiv out of aspoon and build intricate communication networks. Here too, you learn the onlyrehabilitation possible-hatred of oppression.Steal This Book is, in a way, a manual of survival in the prison that is Amerika. Itpreaches jailbreak. It shows you where exactly how to place the dynamite thatwill destroy the walls. The first section-SURVIVE -lays out a potential actionprogram for our new Nation. The chapter headings spell out the demands for afree society. A community where the technology produces goods and services forwhoever needs them, come who may. It calls on the Robin Hoods of SantaBarbara Forest to steal from the robber barons who own the castles ofcapitalism. It implies that the reader already is "ideologically set," in that heunderstands corporate feudalism as the only robbery worthy of being called"crime," for it is committed against the people as a whole. Whether the ways itdescribes to rip-off shit are legal or illegal is irrelevant. The dictionary of law iswritten by the bosses of order. Our moral dictionary says no heisting from eachother. To steal from a brother or sister is evil. To not steal from the institutionsthat are the pillars of the Pig Empire is equally immoral.We cannot survive without learning to fight and that is the lesson in the secondsection. FIGHT separates revolutionaries from outlaws. The purpose of part twois not to fuck the system, but destroy it. The weapons are carefully chosen. Theyare "home-made," in that they are designed for use in our unique electronicjungle. Here the uptown reviewer will find ample proof of our "violent" nature. Butagain, the dictionary of law fails us. Murder in a uniform is heroic, in a costume itis a crime. False advertisements win awards, forgers end up in jail. Inflated pricesguarantee large profits while shoplifters are punished. Section three - LIBERATE - concerns itself with efforts to free stuff (or at leastmake it cheap) in four cities. Sort of a quick U.S. on no dollars a day. It begins toscratch the potential for a national effort in this area. Since we are a nation ofgypsies, dope on how to move around and dig in anywhere is always needed.Together we can expand this section. It is far from complete, as is the entireproject. Incomplete chapters on how to identify police agents, steal a car, runday-care centers, conduct your own trial, organize a G.I. coffee house, start arock and roll band and make neat clothes, are scattered all over the floor of thecell. The book as it now stands was completed in the late summer of 1970. Forthree months manuscripts made the rounds of every major publisher. In all, over30 rejections occurred before the decision to publish the book ourselves wasmade, or rather made for us. Perhaps no other book in modern times presentedsuch a dilemma. Everyone agreed the book would be a commercial success. Buteven greed had its limits, and the IRS and FBI following the manuscript with theirlittle jive rap had a telling effect. Thirty "yeses" become thirty "noes" after"thinking it over." Liberals, who supposedly led the fight against censorship, talked of how the book "will end free speech.