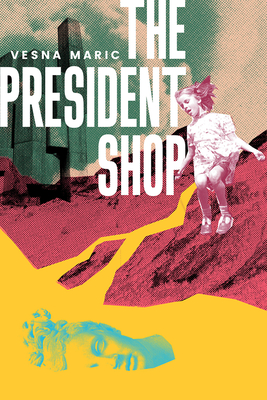 "The President Shop is a marvelous, timeless book that sweeps between the personal and the panoramic as it asks, Does every family, or country, contain an axis, around which the rest of it spins? Can you hear the voice of a stone? How clearly can anyone see the past or future? For which tyrannies have we been unwittingly waving flags?" —Catherine Lacey, author of Pew and Certain American States

The President, the founder of the Nation, is an old man now, but his young and unifying spirit stands steadfastly at the heart of The President Shop, Vesna Maric's debut novel. Images of and tributes to the President are found in all homes in the Nation, procured from stores like the one Ruben and Rosa run. The couple met as partisans, fighting to forge the Nation in the crucible of conflict. But even though their pride shines as brightly as the gilded bust of the President, the younger generation has questioned whether the Nation really has its citizens best interests in mind. Ruben's brother is actively working to avoid mandatory military service as he pines away for another man, and Ruben and Rosa's daughter Mona is too busy adjusting to womanhood to get caught up in state-mandated nostalgia. To further exacerbate the family tension, an elderly uncle claims to have invented a machine to see into the future, which he stores in the basement of the family's apartment building. But there is no telling what the future really holds in store as the beliefs of the past slowly start to crumble.

Vesna Maric was born in Mostar, Bosnia-Herzegovina, in 1976. she left Bosnia-Herzegovina at sixteen as part of a convoy of refugees. She went on to work for the BBC World Service and now writes Lonely Planet travel guides, translates literary fiction and non-fiction from Croatian into English, and writes a variety of journalism for publications including the Guardian. Vesna has collaborated with various artists, including Jane and Louise Wilson, and art projects at the Tate Modern and the London Southbank. Her memoir, Bluebird, was published by Granta in 2009, and was longlisted for The Orwell

"Maric pulls off captivating moments of personal and political disillusionment . . . [offering] a memorable testament to how politics can fracture a family." —Publishers Weekly

"The President Shop reads like a kind of fable about what it was like to grow up in Eastern Europe under the rule of Tito, but it's broader than that, it's about cult of personality, it's about authoritarian rule . . . and I found it unnervingly resonant with my own experiences as an American, particularly in the wake of the last four years." —Brad Listi, Host of Otherpp with Brad Listil podcast

"[T]he story moves toward a layered portrayal of disintegration with the rolling inevitability of fate . . . and it’s a credit to Ms. Marić’s storytelling that this . . . carries the shock and resonance of a death in the family." —Sam Sacks, Wall Street Journal