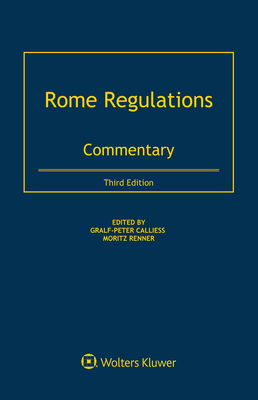 The law applicable to contractual and non-contractual obligations in cross-border civil and commercial matters in the European Union (EU) is the remit of the so-called Rome I and II Regulations that entered into force in 2009, supplemented by the Rome III Regulation of 2012 dealing specifically with divorce and legal separation. This article-by-article commentary - now updated to its third edition - has become a cornerstone resource in handling European cases involving conflict of laws.

The occasion for publishing a third edition is that several landmark judgments on the conflict of laws have been recently rendered both by the Court of Justice of the EU and by domestic courts. Moreover, with Brexit, one of the largest European states will enter into a new form of relationship with the EU, which will specifically impact the conflict of laws. The effects of these major developments are reflected throughout the new edition's extensively revised article-by-article commentary.

The commentary, authored by leading scholars of conflict of laws and drawing on a wide spectrum of case law and scholarship, highlights, among much else, such long-term implications of the Rome Regulations as the following:

It provides black letter law as represented by the jurisprudence of the Court of Justice of the EU and the Member State courts, as well as the latest academic opinion.

In the current era of globalization, where communication, transaction, and migration across borders have transformed from exceptional to omnipresent phenomena, the pressing question is no longer if the state has to grant access to justice in international situations but how that right can be implemented effectively. To this end, renowned conflict of laws scholars analyse every provision of the Regulations in a systematic and thorough manner, making them accessible to a broad international legal audience. The result is an indispensable companion for academics, judges, lawyers, and legal professionals in their day-to-day work.