Stress Echocardiography: Its Role in the Diagnosis and Evaluation of Coronary Artery Disease (Developments in Cardiovascular Medicine #149) (Paperback) 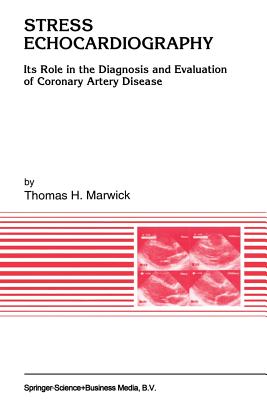 W. F. ARMSTRONG While stress echocardiography is not the first technique to be applied to patients for the diagnosis of coronary artery disease, it represents an impor- tant clinical tool, likely to become of increasing pertinence in today's era of cost containment and mandated cost-effectiveness of diagnosis. It may be the most rapidly expanding area of clinical echocardiography today. Stress echocardiography as we know it today represents the natural con- clusion and merger of observations made over fifty years ago. In 1935 Tenn- ant and Wiggers demonstrated that the immediate result of a coronary oc- clusion, was an instantaneous abnormality of wall motion 1]. As viewed from the surface of the heart in an open chest dog preparation, cyanosis and obvious paradoxical bulging of the left ventricular wall was noted. At a similar time Masters and co-workers, using fairly rudimentary exercise de- vices, described the response of the human cardiovascular system to sustained exercise (Figure 1) 2]. These two observations diverged for four decades while clinical investigation was pursued along the two parallel lines.