Morphology of Crystals: Part A: Fundamentals Part B: Fine Particles, Minerals and Snow Part C: The Geometry of Crystal Growth by Jaap Van Such (Materials Science of Minerals and Rocks) (Paperback) 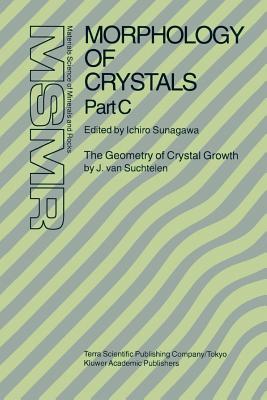 The molecular mechanisms underlying the fact that a crystal can take a variety of external forms is something we have come to understand only in the last few decades. This is due to recent developments in theoretical and experimental investigations of crystal growth mechanisms.
Morphology of Crystals is divided into three separately available volumes. Part A contains chapters on roughening transition; equilibrium form; step pattern theory; modern PBC; and surface microtopography. This part provides essentially theoretical treatments of the problem, particularly the solid-liquid interface. Part B contains chapters on ultra-fine particles; minerals; transition from polyhedral to dendrite; theory of dendrite; and snow crystals. All chapters are written by world leaders in their respective areas, and some can be seen as representing the essence of a life's work. This is the first English-language work which covers all aspects of the morphology of crystals - a topic which has attracted top scientific minds for centuries. As such, it is indispensable for anyone seeking an answer to a question relating to this fascinating problem: mineralogists, petrologists, crystallographers, materials scientists, workers in solid-state physics and chemistry, etc.
In Parts A: Fundamentals and B: Fine Particles, Minerals and Snow equilibrium and kinetic properties of crystals are generally approached from an atomistic' point of view. In contrast, Part C: The Geometry of Crystal Growth follows the alternative and complementary geometrical' description, where bulk phases are considered as continuous media and their interfaces as mathematical surfaces with orientation-dependent properties. Equations of motion for a crystal surface are expressed in terms of vector and tensor operators working on surface free energy and growth rate, both expressed as functions of surface orientation and driving force, or affinity' for growth. This approach emphasizes the interrelation between equilibrium and kinetic behavior. Part 1 establishes the theoretical framework. Part 2 gives a construction toolbox for explicit (analytic) functions. An extra chapter is devoted to experimental techniques for measuring such functions: a new approach to sphere growth experiments. The emphasis throughout is on principles and new concepts.
Audience: Advanced readers familiar with traditional aspects of crystal growth theory. Can be used as the basis for an advanced course, provided supplementation is provided in the areas of atomistic models of the advancing surface, diffusion fields, etc.