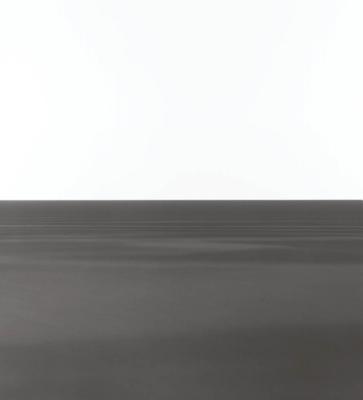 The repetition and variation of water: an expanded edition of Sugimoto's classic series

This edition of Hiroshi Sugimoto's (born 1948) popular photography series is expanded and updated from the out-of-print first edition, including five previously unpublished photographs. For more than 30 years, Sugimoto has traveled the world photographing its seas, producing an extended meditation on the passage of time and the natural history of the earth reduced to its most basic, primordial substances: water and air. Always capturing the sea at a moment of absolute tranquility, Sugimoto has composed all the photographs identically, with the horizon line precisely bifurcating each image. The repetition of this strict format reveals the uniqueness of each meeting of sea and sky, with the horizon never appearing exactly the same way twice. The photographs are romantic yet absolutely rigorous, apparently universal but exceedingly specific. In the introduction Munesuke Mita writes, It is clear that Sugimoto's Seascapes possess a vitality that stands in contrast to Rothko's last paintings, which took the reductionist passion of modernism--the desire to erase everything--to its extreme.

Hiroshi Sugimoto has exhibited extensively in major museums and galleries throughout the world, and his work is held in numerous public collections, including the Metropolitan Museum of Art, New York; Museum of Contemporary Art, Tokyo; National Gallery, London; National Museum of Modern Art, Tokyo; Smithsonian, Washington, DC; and Tate, London, among others. Sugimoto divides his time between Tokyo and New York City.