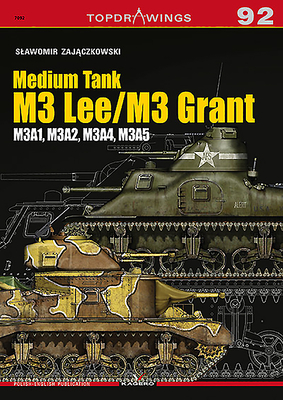 By Slawomir Zajaczkowski
$24.95
Email or call for price.

This is book number 7092 in the Topdrawings series.

M3 General Lee - an American medium tank from World War II era, also used by the British army. In the US, known as Lee, in the United Kingdom as Grant. M3 tank was created as a result of the need to replace the obsolete M2 tank, which did not match the WWII battlefield. The serial production began in August 1941. The M3 tank had many components from the M2 light tank, including chassis, Wright R975 EC2 star engine and the shape of the combat compartment.

M3 was meant to be a transitional solution due to the lack of turrets for a 75 mm cannon (M2 type cannon), which was finally mounted in the sponson on the right front of the hull. Second antitank gun - 37 mm caliber - was mounted in the turret and intended to fight enemy vehicles. The original M3 was equipped with a riveted hull and a turret in which M6 cannons were mounted (cal. 37 mm). In the M3A1 version the riveted turret construction, dangerous for the crew, was replaced with a cast version. The new turret was easier to assemble, which accelerated the production process. It also reduced the weight of the vehicle. Both guns were equipped with gyroscopic stabilizers. Additional armament included two or three Browning M1919 machine guns, caliber 0.30 inches. In American M3, two Brownings were mounted in a small rotating dome at the top of the turret. In the British version there was an entrance hatch for the crew.

The crew of the tank consisted of six soldiers (initially seven). A total of 6258 M3 tanks were produced in all versions. They served in the British, Australian, American and Soviet armies.