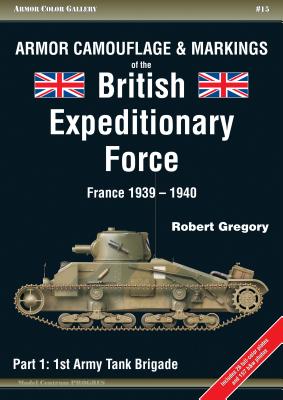 During the inter war period, the British army decided upon two tank designs: the Infantry Tank, which featured thick armor and slow speed to attack defensive positions, and the Cruiser Tank, with thin armor and fast speed to exploit any breakthrough. The Infantry Tank would equip an Army Tank Brigade and the Cruisers would equip the Armored Brigades. These designs were based on the theory that any new war would resemble the static warfare of 1914-1918. Early in the 1940 campaign in France and Flanders, the British Expeditionary Force, along with the Belgian army and the best French divisions, were encircled north of the Somme. Futile attempts were made to break the encirclement. One such attempt was made by the 1st Army Tank Brigade, launched south of the town of Arras. The appearance of these Infantry Tanks stunned the German commander, who did not realize how few tanks there actually were, which caused the Germans to slow their advance, thus buying valuable time for the Dunkirk evacuation. The only British tanks north of the Somme that were capable of fighting other tanks were the Infantry Tanks of the 1st Army Tank Brigade. The Brigade had only two of its three Battalions and only one Battalion with its full complement of the larger A12. Part 1 of Armor Camouflage & Markings of the British Expeditionary Force, France 1939-1940 examines the tanks of the 1st Army Tank Brigade. For security reasons, photography by British soldiers was strictly forbidden but encouraged on the German side. These after-the-battle photographs taken by German soldiers are valuable in examining what the tanks looked like during the 1940 campaign. Included are 157 b&w photographs and 26 full-color plates. Using war diaries, training pamphlets and other documents, the camouflage and markings of these armored vehicles are described. A brief description of the three types of tanks used, and the movements of the Brigade during the campaign are also covered. The photo captions point out the differences in the three types of A11, the modifications made specifically to the A12s and other information when known, such as the vehicle's location and tank crew. The color plates depict the Light Tanks, the A11 and A12 Infantry Tanks, and show the camouflage and markings on several of each type. This book is the best-captioned reference to date, companioned with charts, rare unpublished photographs and color plates. It is a valuable resource for the armor enthusiast and military modeler.