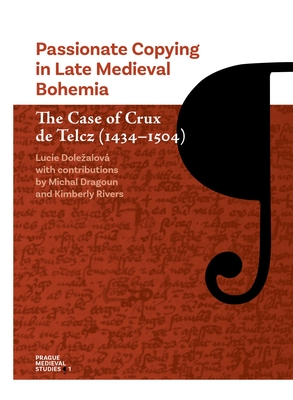 A case study of the unusual liberties taken by the fifteenth-century Bohemian scribe Crux of Telcz.​

Passionate Copying in Late Medieval Bohemia addresses a unique case in the culture of manuscript transcription and textual transmission during the late fifteenth century, a transformative period in book history. This period is marked by the widespread intrusion of an unprecedented number of scribal paratexts—tables of contents, indices, explanatory notes, etc.—into transcribed manuscripts. To explore this development, the authors dig deep into a detailed case study of the Bohemian scribe Crux of Telč (1434–1504). Unlike most medieval copyists, who were stringent in their work even when inserting paratexts, Crux of Telč is notable for the extreme liberties he took with manuscript contents. Sometimes diligent, sometimes careless, his copies are notably rife with his own inventions and additions to the text. Crux’s life story is meticulously reconstructed in this book, relying on his colophons—the personal annotations left by medieval copyists to identify themselves and their circumstances—and other personal notes. The singularity of his approach to manuscripts is reinforced by the authors’ inclusion of a study of another late medieval scribe, Johannes Sintram of Würtzburg (d. 1450), whose scrivening is compared with that of Crux of Telč.

Michal Dragoun is a codicologist focusing on medieval Bohemia.

Kimberly Rivers is professor of history at the University of Wisconsin-Oshkosh.