History of the Black Man: An authentic collection of historical information on the early civilization of the descendents of Ham, the son of Noah (Paperback) 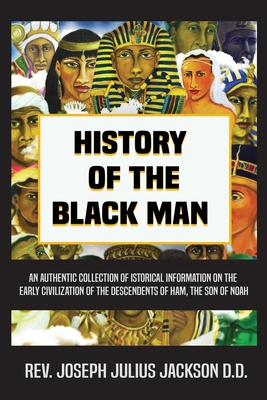 Rev. Joseph Julius Jackson, D.D. was an African-American preacher and head of the Baptist Aged Ministers' Home and Theological Seminary, in Bellefontaine, Ohio.

After considerable expense and with much labor and research he published the book "The History of the Black Man" which covers an authentic collection of historical information on the early civilization of the descendents of Ham, the son of Noah: history of the Black kingdoms of Ghana, Melle, Songhay and Hansas, and the early American Negro.

In introducing his book Jackson notes that "it is very essential that every race should possess a correct knowledge of its own past history. The masses of the American negro have been deprived of the opportunity of obtaining an adequate knowledge of the past history of the black man. The average historian has not considered the ancient history of the black man of sufficient importance to claim his attention. Even Mr. Myers would have the students of his general history believe that the black man has always been a hewer of wood and a drawer of water.

"A large majority of the men of letters of our own people who are very proficient in ancient, medieval and modern history of Greece, Rome, and even China, Japan, and other European and Asiatic countries, know very little of the history of their own people. A lack of historical knowledge of ourselves has been the means of lessening of our race pride. A better knowledge of the contribution of the black man to civilization will cause us to have a better opinion of ourselves.

"At considerable expense and with much labor and research, the writer has succeeded in collecting what he considers a great deal of valuable information, which he has placed in this little book and given to the public at a cost within the reach of everyone who desires valuable information upon the past and present history of the black man. A brief reference will be made to the origin of the race, the rise of the Ethiopian and Egypt, and the early influence of African civilization upon the ancient history of the world. Considerable space will be given to the black kingdoms of Soudan and the high degree of civilization which was found to exist among them before the arrival of white explorers. The following are some of the kingdoms to which reference will be made at some length: namely: Ghana, Melle, Songhay and Hansas. It will also be shown that Spain was ruled by a black dynasty of Africa for more than half a century, 1086-1147. Much space will be given to the history of the American negro, 1619 to the present date."