The Foundations of Computability Theory (Hardcover) 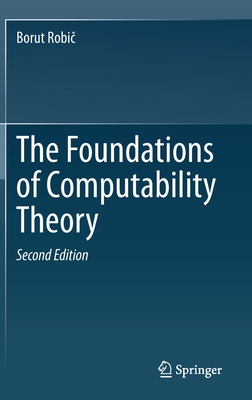 This book offers an original and informative view of the development of fundamental concepts of computability theory. The treatment is put into historical context, emphasizing the motivation for ideas as well as their logical and formal development. In Part I the author introduces computability theory, with chapters on the foundational crisis of mathematics in the early twentieth century, and formalism. In Part II he explains classical computability theory, with chapters on the quest for formalization, the Turing Machine, and early successes such as defining incomputable problems, c.e. (computably enumerable) sets, and developing methods for proving incomputability. In Part III he explains relative computability, with chapters on computation with external help, degrees of unsolvability, the Turing hierarchy of unsolvability, the class of degrees of unsolvability, c.e. degrees and the priority method, and the arithmetical hierarchy. Finally, in the new Part IV the author revisits the computability (Church-Turing) thesis in greater detail. He offers a systematic and detailed account of its origins, evolution, and meaning, he describes more powerful, modern versions of the thesis, and he discusses recent speculative proposals for new computing paradigms such as hypercomputing.

This new edition is completely revised, with almost one hundred pages of new material. In particular the author applied more up-to-date, more consistent terminology, and he addressed some notational redundancies and minor errors. He developed a glossary relating to computability theory, expanded the bibliographic references with new entries, and added the new part described above and other new sections.

Prof. Borut Robič received his Ph.D. in Computer Science from the University of Ljubljana in 1993. He is a member of the Faculty of Computer and Information Science of the University of Ljubljana where he leads the Laboratory for Algorithms and Data Structures. He has had guest professorships, fellowships and collaborations with the University of Cambridge, the University of Augsburg, the University of Grenoble, and the Jozef Stefan Institute in Ljubljana. His research interests and teaching experience address algorithms; computability and computational complexity theory; parallel, distributed and grid computing; operating systems; and processor architectures. In addition to the 1st ed. of the current book, Prof. Robič coauthored the books "Processor Architecture: From Dataflow to Superscalar and Beyond" (Springer 1999) and "Introduction to Parallel Computing: From Algorithms to Programming on State-of-the-Art Platforms" (Springer 2018).