Units of Measurement: Past, Present and Future. International System of Units (Paperback) 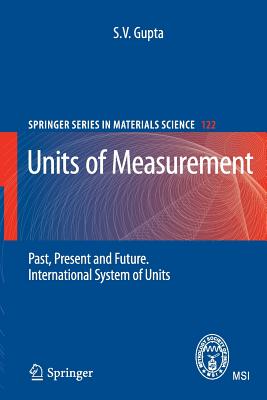 This is book number 122 in the Springer Series in Materials Science series.

It is for the first time that the subject of quantities and their respective units is dealt this much in detail, a glimpse of units of measurements of base quantities of length, time, mass and volume is given for ancient India, three and four dimensional systems of measurement units are critically examined, establishment of the fact that only four base units are needed to describe a system of units, the basics to arrive at the unit of a derived quantity are explained, basic, derived and dimensionless quantities including quantity calculus are introduced, life history of scientists concerned with measurements units are presented to be inspiring to working metrologists and students. The International System of Units including, Metre Convention Treaty and its various organs including International National of Weights and Measure are described. The realisation of base units is given in detail. Classes of derived units within the SI, units permitted for time to come, units outside SI but used in special fields of measurements are described. Methods to express large numbers are explained in detail. Multiples and sub-multiples prefixes and their proper use are also given. The latest trends to redefine the base Kilogram, Ampere, Kelvin and Mole on existing base units of mass, electric current, temperature and amount of substance, in terms of a single parameter or fundamental constants are briefly described.