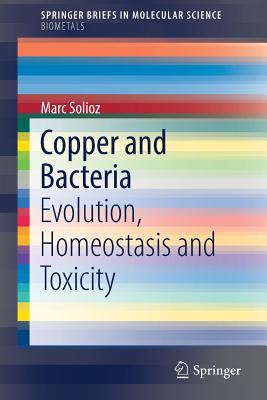 In the past two decades, great progress has been made in the understanding of copper as a bioelement. The book summarizes the current knowledge of copper toxicity, homeostasis and resistance in bacteria, in which proteins like copper ATPases, copper chaperones and copper-responsive regulators of gene expression play major roles. The author also discusses the metallation of cuproenzymes. The evolution of the use of copper by cells and of copper-homeostatic proteins are is also considered in this Brief.

A native of Zurich, Marc Solioz studied chemistry and engineering in Zurich. He then moved to the US, where he obtained his PhD in Biochemistry at St. Louis University in 1975. The PhD work focused on genetic transfer in photosynthetic bacteria. During postdoctoral studies at the Biocenter in Basel, he investigated the genetics and biogenesis of mitochondria. This was followed by seven years as an assistant professor at the ETH in Zurich, where he investigated ion transport by cytochrome oxidases and ATPases. In 1989 he became professor of biochemistry at the University of Bern. With the discovery of the first copper-pumping ATPase in 1992, Marc's focus shifted to copper, including copper-related diseases and the antimicrobial activity of metallic copper; work in this area included advisory activity on government and industry panels. In 2014, he received a grant from the Russian Government to build up a new laboratory in Tomsk, Siberia, where work on copper and other heavy metals continues.