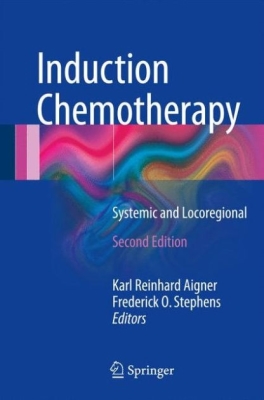 This book presents the full range of management techniques and practices used in induction chemotherapy - both systemic and locoregional - by experienced international groups within one accessible volume. It provides the latest information on the pioneering and cutting-edge practices employed in different institutions and documents the advantages of integrated treatment schedules. All those responsible for treating patients with locally advanced cancers may find new, interesting aspects of locoregional cancer management and will find this book to be an invaluable source of up-to-date information.

Throughout the world, induction chemotherapy is being used as part of an integrated plan of management for locally advanced, solid tumors, while systemic chemotherapy is most commonly used to shrink primarily non-operable tumors. In cases of poorly or nonresponsive tumors, attempts have been made to administer chemotherapeutics via the arterial route in order to achieve higher localized drug exposure and response rates. Such therapies are being practiced worldwide in independent, remote departments in universities, teaching hospitals and clinical schools. Frequently, however, these teams remain relatively unaware of the work being done in other institutions, which may slow further progress.

Professor Dr. med. Aigner is one of the world's pioneers in the field of regional chemotherapy. He has been involved with regional chemotherapy for over 30 years and today he is considered as one of the world's most experienced experts in this treatment method. Numerous lectures and guest operations in the USA, Japan, China, Israel, Egypt, Australia and a number of other countries, as well as over 200 professional publications, lectures and guest operations both in Germany and abroad attest to his medical commitment to RCT - regional chemotherapy.Prof. Aigner completed his medical studies and his basic surgical training in cardiovascular surgery at the University of Erlangen. He obtained his habilitation doctorate in surgical oncology at the University of Giessen, with a research focus in techniques of regional chemotherapy. In 1981, Prof Aigner developed a technique for performing the first isolated liver perfusion in humans using a heart-lung machine, and over subsequent years a variety of additional surgical procedures and specialized catheters for isolated therapy of organs and parts of the body, including the treatment of pancreatic carcinoma.From 1986 until 1991, Prof. Aigner was Chief Physician for Surgery at the Kreiskrankenhaus Trostberg am Chiemsee, and until 2001, he was the Chief Physician in the Department of Oncological Surgery at the Asklepios Paulinen Clinic in Wiesbaden. From 2002 until 2005 he led the Department of oncological surgery at the Medias Klinik GmbH in Ransbach-Baumbach. Since 2006 Prof. Aigner has been the Medical Director of the Medias Klinikum GmbH & Co KG, a private clinic for oncological surgery in Burghausen (Salzach).Professor Emeritus Fred Stephens is a global authority in innovative approaches to the treatment of previously incurable cancers. From his base at Sydney University, Professor Stephens was an early pioneer in Regional Chemotherapy, with experience spanning over four decades. His remarkable results gained international attention as he was invited to deliver keynote speeches and lectures at over thirty international conferences at Universities spanning Germany, France, the UK, USA, Japan, Israel, Austria, Hungary and of course, Australia. In 1988 Prof Stephens' pre-eminence in Regional Chemotherapy was formally recognised with his election as Foundation President of the International Society for Regional Cancer Therapy, a position he held until succeeded by Prof Aigner in 1995.One of three Managing Editors of the journal Regional Cancer Treatment (now incorporated in the European Journal of Surgical Oncology) Prof Stephens has published extensively, both on Regional Chemotherapy and on Cancer more broadly. These include over 200 publications within refereed medical journals (of which 67 are single author publications); three Cancer textbooks and five books on Cancer for laypeople. Prof Stephens doctorate (MD) in Surgical Oncology was conferred by Sydney University in 1970. His Master of Surgery (MS) was conferred by Sydney University the same year. As Associate Professor of Surgery, Dr Stephens developed his treatment protocols while building a strong clinical/research team; first at Sydney Hospital, then at the Royal Prince Alfred Hospital from 1985. He accepted the role of Professor of Surgical Oncology (and Head of Surgery) for the University of Sydney in 1988. On his retirement in 1995, Prof Stephens was conferred the distinction of a personal chair (Professor Emeritus) in Surgical Oncology, in recognition of his outstanding contributions to the field of Regional Chemotherapy: - his protocols in Regional Chemotherapy have gained wide acceptance at Universities and medical centres of excellence worldwide. Most recently (2015), he has concluded an agreement with Macquarie University for the establishment of Australia's first permanent chair in Surgical Oncology.