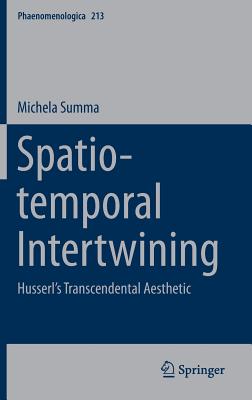 This volume explores Husserl's theory of sensibility and his conceptualization of spatial and temporal constitution. The author maps the linkages between Husserl's 'transcendental aesthetic', the theory of pure experience in empirio-criticism, as well as Immanuel Kant's transcendental philosophy. The core argument in this analysis centers on the relationship between spatiality and temporality in Husserl's philosophy. The study interrogates Husserl's understanding of the relationship between spatiality and temporality in terms of stratifications, analogies and parallelisms. It incorporates a discussion of the potentialities and limitations of such an understanding. It concludes that such limits can be overcome by adopting an understanding of spatiality and temporality as interwoven moments of sensible experience-a 'spatio-temporal intertwining'. This 'intertwining' is made explicit in a thorough inquiry into three central topics in the phenomenological analysis of sensible experience: spatio-temporal individuation, perspectival givenness and bodily experience. The book shows how such an inquiry can form the bedrock of a dynamic and relational understanding of experience as a whole.

Michela Summa earned her PhD at the Universities of Pavia and Leuven in 2010. She currently works as a researcher at the Phenomenology Section of the Clinic for General Psychiatry in Heidelberg. From 2009 to 2012 she was active within an interdisciplinary project financed by the German Ministry of Education and Research, where she was responsible in particular for the subproject on the phenomenology of body-memory. Since 2012 she is active within another interdisciplinary project, named "Knowledge through Interaction", financed by the Volkswagen Stiftung, where she works on the subproject on the phenomenological theory of pretense. Her main research interests include: the phenomenology of sensible experience, the relationship between Kant's and Husserl's transcendental aesthetic, the phenomenology and the psychopathology of self- and other-experience, the phenomenology of memory and imagination, the relationship between phenomenology, psychopathology and cognitive sciences.