Handbook of Population (Handbooks of Sociology and Social Research) (Hardcover) 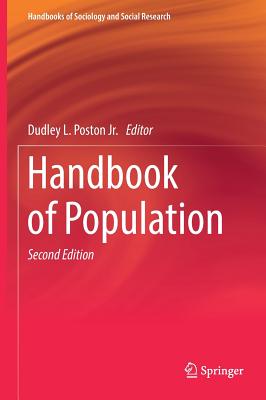 Dudley L. Poston, Jr. is Professor of Sociology, and the George T. and Gladys H. Abell Professor of Liberal Arts, at Texas A&M University. He also holds the positions of Adjunct Professor of Demography at People's University, Beijing, China; Adjunct Professor of Sociology at Fuzhou University, Fuzhou, China; and Adjunct Professor of Demography at Nanjing Normal University, Nanjing, China. Dr. Poston joined the faculty of Texas A&M University in 1992, and served as the Head of the Department of Sociology from 1992 to 1997. He previously served on the Rural Sociology and Sociology faculties, respectively, of Cornell University (1988-1992), and The University of Texas at Austin (1970-1988), where he was also affiliated with the Population Research Center (University of Texas) and the Population and Development Program and the East Asia Studies Program (Cornell University). He was Chair of the Department of Rural Sociology at Cornell University from 1989 to 1992, and he was Director of the Population Research Center at the University of Texas at Austin from 1981 to 1986. His research interests include demography and human ecology, with special attention to the populations of China, Taiwan, and Korea; and human sexuality. At Texas A&M he teaches undergraduate classes in demography and graduate classes in demography, statistics, demographic methods, and the demography of sexuality. In his almost five four decades as a professor, he has chaired over 60 doctoral student committees, including over 40 at Texas A&M University. In his career as a professor since 1970, he has taught demography, statistics and sociology classes to over 4,500 undergraduate and graduate students. He has coauthored or coedited 19 books and has authored or coauthored over 320 journal articles and book chapters on various demographic and sociological topics.Dr. Poston received the Research Excellence Award from the Rural Sociological Society in 1994. In 1998 he received a Distinguished Achievement in Research Award from Texas A&M University, and in 1999 he received a Distinguished Teaching Award from the College of Liberal Arts of Texas A&M University; in 2009 he received a Distinguished Achievement Award in Graduate Student Mentoring from Texas A&M University. And in 2011 he received the Social Scientist of the Year Award from the Southwestern Social Science Association. In 1991, he received a Distinguished Alumnus of the Year Award from the University of Oregon. He was a Visiting Research Professor of Sociology at the National Taiwan University in 1987. Dr. Poston served as President (2004-2005) of the Southwestern Social Science Association. He served (1995 through 1998) as the President of Research Committee 41 (Sociology of Population) of the International Sociological Association. He served (1995 through 1997) as President of the North American Chinese Sociologists Association. He served as President of the Southwestern Sociological Association in 1983-84. He served during 1975-1977 as the President of the Southern Demographic Association. He has been elected to membership in Alpha Kappa Delta (1964), Gamma Sigma Delta (1991), Phi Beta Delta (1993), Phi Kappa Phi (1999), and the Sociological Research Association (1984). And in 2014 he was elected a Fellow of the American Association for the Advancement of Science.