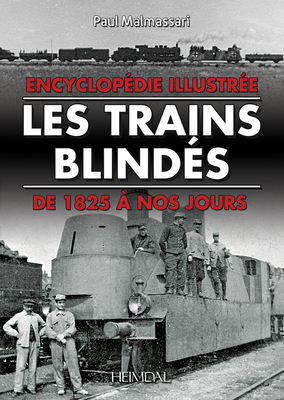 By Paul Malmassari
$97.00
Email or call for price.

In the early 1990s, retired French army Colonel, Paul Malmassari, wrote a general reference book about armored trains for Editions Heimdal. At the time very little had been written on the subject

Now some thirty years later this undisputed expert in the field adopts a wholly new approach; one that's very different to earlier works about these railroad dependent steel giants.

Armored trains, from their first appearance to the current day, and used by more than sixty states, are described and explained in great detail. Russia's armored trains which played a particularly important role in the civil war of 1917-1922; Germany's Panzerz ge and French armored trains of both world wars are all described. But armored trains have a history that covers four continents, including in countries where one might not suspect they might have been used--these are all covered too.

This massive and encyclopedic work, comprising over 520 pages, is an indispensable tool for all with an interest in this particular and very specialist military subject, and is presented in a way that makes it appealing both to the enthusiast and the expert.

The book is highly illustrated with many photographs, graphics and technical plans. It is unique in its combining of technical detail with the historical context in which these enormous railroad monsters saw action.