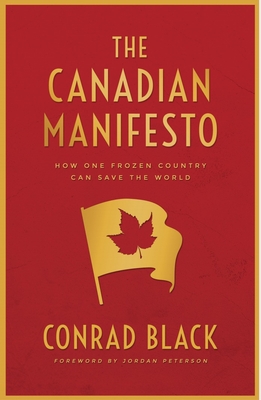 Black's Manifesto reminds us who we were and, therefore, who we are. In doing so, he lays the groundwork for us to consider who we might yet become.
- Jordan Peterson, University of Toronto, Author of 12 Rules for Life

WITH A NEW FOREWORD BY THE AUTHOR

Chipper, patient, and courteous, Canada has pursued an improbable destiny as a splendid nation of relatively good and ably self-governing people, but most would agree we have not realized our true potential.

Canada's main chance, writes Black, is now before it...and it is not in the usual realms of military or economic dominance. With the rest of the West engaged in a sterile left-right tug of war, Canada has the opportunity to lead the world to its next stage of development in the arts of government. By transforming itself into a controlled and sensible public policy laboratory, it can forge new solutions to the problems of welfare, education, health care, foreign policy, and other governmental sectors, and make an enormous contribution to the welfare of mankind.

Canada has no excuse not to lead in this field, argues Black, who offers nineteen visionary policy proposals of his own. He claims that this is the destiny, and the vocation, Canada could have, not in the next century, but in the next five years of imaginative government."

Conrad Black ============ Conrad Black is the author of widely acclaimed biographies of Maurice Duplessis, Franklin D. Roosevelt, and Richard Nixon. He was for many years the head of the Argus, Hollinger, and Telegraph Newspaper groups. Black is a financier, and a columnist in the National Post, which he founded, and the National Review Online. He is also the author of Rise to Greatness, a best-selling history of Canada, and has been a member of the British House of Lords since 2001. He lives in Toronto.