The Boy Who Could Run But Not Walk: Understanding Neuroplasticity in the Child’s Brain (Hardcover) 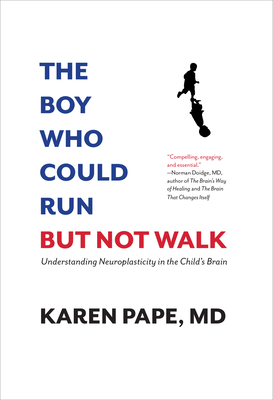 In this groundbreaking book, Dr. Karen Pape tells the story of how some children with early brain damage astounded everyone around them. The brain injury they suffered at or near birth had led to motor problems such as the awkward gait we associate with cerebral palsy. Yet they were able to run, kick a soccer ball, tap dance, and play tennis. This was not supposed to happen. It ran counter to the prevailing belief that the brain is hardwired and fixed. When Dr. Pape first shared her remarkable findings, she ran into fierce opposition from mainstream medicine. Yet this courageous neonatologist didn’t back down.

In her clinical practice, Pape helped many young brain-damaged children to significantly improve their movement. It led her to ask why some of them could run but not walk with the same ease. Her answer was astounding: By the time they learned to run, their brains had healed. The awkward walking gait was actually a bad habit acquired while the brain was still damaged.

This is the power and the beauty of neuroplasticity, the brain’s amazing ability to change and heal. It has revolutionized the treatment of adults who suffer stroke. Now, for the first time, this remarkable book shows that children with a brain injury at or near birth can get better, too. These stories of children’s recovery and improvements are a revelation—surprising, inspiring, and illuminating. They offer real hope for some of the world’s most vulnerable children and a better understanding of how the baby brain grows and recovers.

Karen Pape, MD, FRCPC, is a neonatologist and clinical neuroscientist. As a medical innovator, she is challenging the system to raise expectations for babies born with early brain and nerve injury. She was a neonatologist and director of the Neonatal Follow-up Clinic at Toronto’s renowned Hospital for Sick Children, with an additional research fellowship in Neonatal Pathology and Ultrasound Brain Scans in London, England. She co-authored a book on baby brain pathology and was instrumental in the development of neonatal ultrasound brain scanning, now used in neonatal intensive care units worldwide. Pape then directed work at the Magee Clinic in Toronto, developing a new, personalized approach to children and adults with early onset brain or nerve damage. She has lectured widely and conducted over 200 training workshops and conferences for parents, therapists, and physicians throughout North America and internationally in 12 countries. Dr. Pape lives in Toronto, Canada.

"Neonatologist and clinical neuroscientist Pape argues that treatments for children with early damage to the brain, nerves, or spinal cord have not been ambitious enough. Her goal is "a cure for some, improvement for all." She criticizes the inertia she has observed in medicine that causes many primary care providers to postpone referring patients with cerebral palsy (CP) for treatment until symptoms become "bad enough" to warrant attention. Early intervention, she argues, produces far better results. She criticizes the same inertia for resisting challenges to the disproved yet still common belief that in many cases, rehabilitation is impossible and the best possible outcome is the child's condition failing to worsen. Using personal observations, case studies, and published research, Pape makes a convincing case for a more optimistic prognosis for children with CP. The book reads like an academic text, and the tone is likely too esoteric for general readers, but Pape's descriptions of a variety of treatments may provide useful updates for medical professionals, and the whole book will be interesting to parents and caregivers of children with cerebral palsy." — Publishers Weekly

“This book is chock-full of cases of children with cerebral palsy who vastly exceed their physicians’ expectations, as well as practical advice for parents and caregivers on how this can be done. Karen Pape, MD, is a pioneer, rightly demanding that colleagues integrate the new science of brain plasticity as it applies to these children, and this is her cri de coeur, recording not only the new breakthroughs, but effectively explaining why, tragically, so many families are still denied these important interventions.” — Norman Doidge, MD, author of The Brain's Way of Healing and The Brain That Changes Itself

“The delightful history of a feisty, path-finding doctor on the way to helping every child with early brain injury to a better life. It’s chock-full of wisdom, deep scientific and medical understanding, wonderful practical advice, and justified hope.” — Michael Merzenich, PhD, Professor Emeritus, UCSF, author of Soft-Wired, and winner of the 2016 Kavli Prize in Neuroscience

“An affirmation of the life-changing benefits of neuroplastic healing and some powerful lessons for life.” — Jay Greenspan, MD, MBA, Neonatologist, Pediatrician-in-chief, A.I. Dupont Hospital for Children

“Accessible insights into breakthroughs in the understanding of neurological deficits in children, and exciting additions to the repertoire of available treatment methods.” — Warwick J. Peacock, MD, Director of The Surgical Science Laboratory at UCLA, Professor Emeritus Neurosurgery, UCSF

“Never before has a book been written that so effectively marries science and story to help parents understand how they can improve their child’s potential.” — Professor Iona Novak, PhD, Head of Research, Research Institute, Cerebral Palsy Alliance, University of Sydney, Australia

"Dr. Karen Pape changes the paradigm ‘No hope of a cure’ to ‘Cure for some and improvement for all,’ giving children with brain damage a reason to fight.” — Lorenzo Beltrame, professional tennis player and coach, awarded Coach of the Year and "DOC" Counsilman Science Awards by the United States Olympic Committee