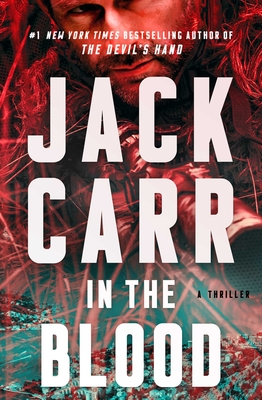 This is book number 5 in the Terminal List series.

“Take my word for it, James Reece is one rowdy motherf***er. Get ready!” —Chris Pratt, star of the #1 Amazon Prime series The Terminal List

A woman boards a plane in the African country of Burkina Faso having just completed a targeted assassination for the state of Israel. Two minutes later, her plane is blown out of the sky.

Over 6,000 miles away, former Navy SEAL James Reece watches the names and pictures of the victims on cable news. One face triggers a distant memory of a Mossad operative attached to the CIA years earlier in Iraq—a woman with ties to the intelligence services of two nations…a woman Reece thought he would never see again.

Reece enlists friends new and old across the globe to track down her killer, unaware that he may be walking into a deadly trap.

Jack Carr is a #1 New York Times bestselling author and former Navy SEAL. He lives with his wife and three children in Park City, Utah. He is the author of The Terminal List, True Believer, Savage Son, The Devil’s Hand, and In the Blood. His debut novel, The Terminal List, was adapted into the #1 Amazon Prime Video series starring Chris Pratt. He is also the host of the top-rated podcast Danger Close. Visit him at OfficialJackCarr.com and follow along on Instagram, Twitter, and Facebook at @JackCarrUSA.

"Gripping...fast-paced...fans will get their money's worth."
— Publishers Weekly

"Hands down, IN THE BLOOD is the best book I’ve read this year. I’ve said from the beginning that covering Carr is what I’d imagine it would have been like to discover Vince Flynn at the beginning of his career. Now, though, Carr deserves to be mentioned alongside all-time greats like Flynn, Thor, Clancy, and Silva . . . rather than just be compared to them. I know it’s only May, but it’s hard to imagine anyone topping this book in 2022."
— The Real Book Spy

"IN THE BLOOD is the wildest Reece book yet and one that goes beyond the character's endless hunt for justice and blossoms into something more ambitious and just a little weirder than what's come before."
— Military.com