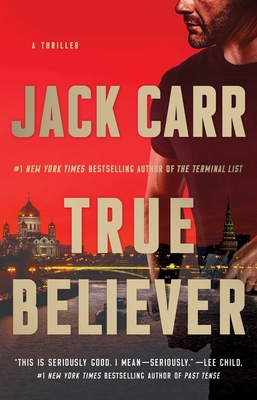 This is book number 2 in the Terminal List series.

In #1 New York Times author Jack Carr’s follow-up to The Terminal List, former Navy SEAL James Reece’s skill, cunning, and heroism put the US government back in his debt and set him on another path of revenge.

When a string of horrific terrorist attacks plagues the Western world during the holiday season, the broader markets fall into a tailspin. The attacks are being coordinated by a shadowy former Iraqi commando who has disappeared into Europe’s underground. The United States government has an asset who can turn the Iraqi against his masters: James Reece, the most-wanted domestic terrorist alive.

After avenging the deaths of his family and team members, Reece emerges deep in the wilds of Mozambique, protected by the family of his estranged best friend and former SEAL Team member. When a series of events uncovers his whereabouts, the CIA recruits him, using a Presidential pardon for Reece and immunity for the friends who helped him in his mission of vengeance.

A high-intensity roller-coaster race against time, True Believer is “one of this year’s hottest thrillers, and a perfect fit for fans of Vince Flynn, Brad Thor, and Daniel Silva” (The Real Book Spy).

Jack Carr is a #1 New York Times bestselling author and former Navy SEAL. He lives with his wife and three children in Park City, Utah. He is the author of The Terminal List, True Believer, Savage Son, The Devil’s Hand, and In the Blood. His debut novel, The Terminal List, was adapted into the #1 Amazon Prime Video series starring Chris Pratt. He is also the host of the top-rated podcast Danger Close. Visit him at OfficialJackCarr.com and follow along on Instagram, Twitter, and Facebook at @JackCarrUSA.

"Jack Carr’s TRUE BELIEVER takes you on a journey into the world of the most difficult hunting on earth, the hunting of men. Flawed and imperfect as they may be, these hunters are the best our government has to offer, standing between good and evil. As you take this mind blowing, heart racing ride, you will constantly wonder, what’s waiting for you in the shadows, and more importantly, can you survive."
— Bernard B. Kerik, New York City’s 40th Police Commissioner

"Lots of new characters have been compared to Vince Flynn’s Mitch Rapp, but James Reece is one of the very few who actually deserves such praise . . . True Believer, the highly-anticipated new thriller From Jack Carr, is one of this year’s hottest thrillers, and a perfect fit for fans of Flynn, Brad Thor, and Daniel Silva . . . Once the bullets start flying, you better hold on tight, because the action never lets up for a second—with Carr delivering the kind of adrenaline-inducing action sequences you’d expect from someone who knows that life intimately.”
— The Real Book Spy

“True Believer by Jack Carr is a powerful, thoughtful, realistic, at times terrifying thriller that I could not put down. A terrific addition to the genre, Jack Carr and his alter-ego protagonist, James Reece, continue to blow me away.”
— Mark Greaney, #1 New York Times bestselling author of MISSION CRITICAL

"If you like a fresh approach to action with authentic details and a believable main character, these books are for you.  I’m a fan."
— David Morrell, New York Times Bestselling Author of First Blood, The Brotherhood of the Rose, and Murder as a Fine Art

"Jack Carr is simply one of the top writers of political thrillers. In modern times, it is easy to cheer for anyone who takes down terrorists, even if it's James Reece, a wanted man. When a series of coordinated attacks occur, the US calls on him. His ways may be unconventional, but they work."
— Bookreporter.com, Best of 2019 pick