The 2084 Report: A Novel of the Great Warming (Paperback) 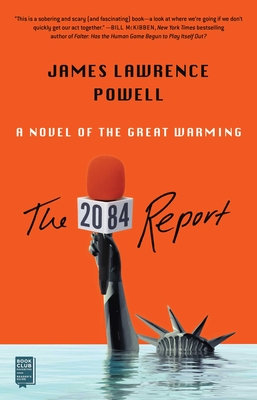 For fans of The Drowned World and World War Z, this “sobering and scary (and fascinating) novel—a look at where we’re going if we don’t quickly get our act together” (Bill McKibben, New York Times bestselling author) regarding climate change—unveils our potential terrifying future.

2084: Global warming has proven worse than even the most dire predictions scientists had made at the turn of the century. No country—and no one—has remained unscathed. Through interviews with scientists, political leaders, and citizens around the globe, this riveting fictional oral history describes in graphic detail the irreversible effects the Great Warming has had on humankind and the planet.

In short chapters about topics like sea level rise, drought, migration, war, and more, The 2084 Report brings global warming to life, revealing a new reality in which Rotterdam doesn’t exist, Phoenix has no electricity, and Canada is part of the United States. From wars over limited resources to the en masse migrations of entire countries and the rising suicide rate, the characters describe other issues they are confronting in the world they share with the next two generations.

“If the existential threat of climate change keeps you up at night, James Lawrence Powell’s The 2084 Report will make you want to do everything in your power to elect leaders who will combat global warming and save our planet” (Marie Claire).

James Lawrence Powell graduated from Berea College with a degree in geology. He earned a PhD in geochemistry from the Massachusetts Institute of Technology and has several honorary degrees, including Doctor of Science degrees from Berea College and from Oberlin College. He taught geology at Oberlin College for over twenty years and served as Acting President of Oberlin, President of Franklin and Marshall College, President of Reed College, President of the Franklin Institute Science Museum in Philadelphia, and President and Director of the Los Angeles County Museum of Natural History. President Reagan and later, President George H. W. Bush, appointed him to the National Science Board, where he served for twelve years. Asteroid 1987 SH7 is named for him. In 2015, he was elected a Fellow of the Committee for Skeptical Inquiry (CSI).

"If the existential threat of climate chnage keeps you up at night, James Lawrence Powell's The 2084 Report will make you want to do everything in your power to elect leaders who will combat global warming and save our planet."
— Marie Claire

"[A] riveting oral history... Simultaneously fascinating and frightening, The 2084 Report will inspire you to start conversations and take action."
— Tor.com

“This is a sobering and scary (and fascinating) book—a look at where we're going if we don't quickly get our act together. And it's replete with clues about how we could indeed make the changes that would make this fiction, not prophecy.”


— Bill McKibben, New York Times bestselling author of Falter: Has the Human Game Begun to Play Itself Out?

"These postcards from the future—dozens of them, as told to a historian in 2084 by scientists, a doctor, a priest, an ambassador, several politicians, a general, the last person ever born on Tuvalu, and others—demanded my full attention. They reminded me that every day counts. We have much to accomplish."
— Edward Maibach, George Mason University Center for Climate Communication

“As the devastating impacts of climate change now become ever-more apparent, historian and expert storyteller James Powell delivers a vision of the planetary nightmare we face if we fail to act now on the defining challenge of our time, the challenge to avert catastrophic climate change. Read this book and be inspired to make a difference.”
— Michael E. Mann, Distinguished Professor, Penn State University and co-author of The Madhouse Effect: How Climate Change Denial Is Threatening Our Planet, Destroying Our Politics, and Driving Us Crazy

“Fans of climate apocalypse fiction will be chilled by this convincing work.”
— Publishers Weekly

"Remarkable....probably the most important literary work on climate change."
— The Herald Glasgow