The Customary Laws of the Greater Bor Dinka Community: Legal and Basic Rules for Self-Administration, 2017 (Paperback) 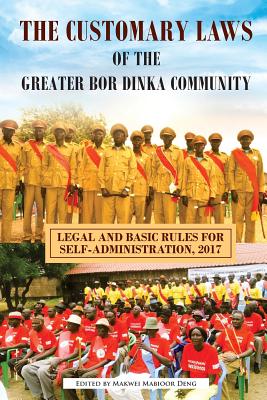 In May 2016 at Freedom Hotel, and in February 2017 at Park Palace Hotel, over hundred traditional chiefs from Duk, Bor and Twic East Counties, comprising of Paramount chiefs, Head Chiefs, and Executive Chiefs plus representatives of the youth, women, religious and local government authorities, gathered in Bor, Jonglei state, to review, harmonize and standardize the customary laws of the Greater Bor Dinka community. The chiefs' conference in Bor was the first time that traditional leaders from Bor, Twic, Nyarweng and Hol communities met formally to discuss the evolving role of customary authority, the effects of war and cattle raiding, the politicization of chiefship, customary and statutory laws, security and peacebuilding within the Greater Bor Dinka community. In particular, national level civil strife and ubiquitous youth militarization have undermined the authority and influence of the traditional authorities. Most of the old, experienced chiefs have been lost to the civil wars, diseases, and old age. The inexperienced new chiefs that replaced the old ones lack knowledge of the traditions and customs. Thus, when it comes to the dispensation of justice in the community, these young new chiefs lack authority and knowledge on customary laws. As a result, traditional chiefs are losing their authority. Furthermore, corruption in election of new chiefs, lack of justice in court cases as well as lack of compensation, have further eroded the authority, legitimacy, and influence of traditional chiefs in the community. Nonetheless, customary authorities of the Greater Bor Dinka community have retained a privileged capacity to mobilize communities, to settle conflicts, to maintain judicial processes in adverse circumstances and to represent the views of their communities. In particular, according to a research conducted by the Rift Valley Institute, traditional system and institutions continue to fulfill important functions in terms of conflict resolution and security, both because kinship remains the basic social structure, and because traditional leadership - contrary to the state - is historically a main source of legitimate authority. As chiefs are the mainstay of the Greater Bor Dinka society, this book therefore seeks to further the essential roles and strengthen the capacity of customary authorities of the Greater Bor Dinka community in peace building, conflict resolution and traditional governance.

About the Editor: Makwei Mabioor Deng, the Editor, is a South Sudanese national currently residing in South Sudan where he works as a Regional Program Development Coordinator for the USAID-funded Viable Support to Transition and Stability (VISTAS) program. He graduated with a double major in Economics and Philosophy from The George Washington University, Washington D.C, USA. He is the author of "Pioocku Thuongjang: The Elementary Modern Standard Dinka" and "Reading Aid: A Reading Guide for Beginners, Part 1-4" which was published to mark the 2nd birthday of his son, Bioor.