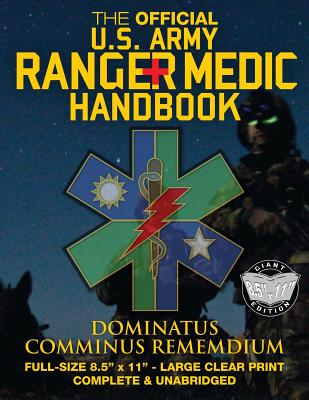 The 75th Ranger Regiment Trauma Management Team (Tactical) are the most revered combat medics in the U.S. Army. The Ranger Medic Handbook contains the distilled wisdom of hard-won experience over decades in combat around the world, in depth and detail, including dozens of easy-to-follow diagnostic and procedural flow charts that will let you correctly and effectively respond to a huge variety of medical situations, both life-threatening emergencies and every-day discomforts.

Shoot and engage targets to defend casualties and self.

Communicate via secure and non-secure means.

Timely, consistent, and competent provider of advanced trauma management within scope of practice.

Practitioner who assists licensed medical providers with medical emergencies and routine care encountered while in garrison, training, and during deployments.

Historically in warfare, the majority of all combat deaths have occurred prior to a casualty ever receiving advanced trauma management. The execution of the Ranger mission profile in the Global War on Terrorism and our legacy tasks undoubtedly will increase the number of lethal wounds.

Ranger leaders can significantly reduce the number of Rangers who die of wounds sustained in combat by simply targeting optimal medical capability in close proximity to the point of wounding. Survivability of the traumatized Ranger who sustains a wound in combat is in the hands of the first responding Ranger who puts a pressure dressing or tourniquet and controls the bleeding of his fallen comrade. Directing casualty response management and evacuation is a Ranger leader task; ensuring technical medical competence is a Ranger Medic task.

A solid foundation has been built for Ranger leaders and medics to be successful in managing casualties in a combat environment. An integrated team response from non-medical personnel and medical providers must be in place to care for the wounded Ranger. The Ranger First Responder, Squad EMT, Ranger Medic Advanced Tactical Practitioner, and Ranger leaders, in essence all Rangers must unite to provide medical care collectively, as a team, without sacrificing the flow and violence of the battle at hand.

An integrated team approach to casualty response and care will directly translate to the reduction of the died of wounds rate of combat casualties and minimize the turbulence associated with these events in times of crisis. The true success of the Ranger Medical Team will be defined by its ability to complete the mission and greatly reduce preventable combat death. Rangers value honor and reputation more than their lives, and as such will attempt to lay down their own lives in defense of their comrades. The Ranger Medic will do no less.

I will never leave a fallen comrade...

Published in the U.S.A. by CARLILE MEDIA.