Return to Life Through Contrology (Paperback) 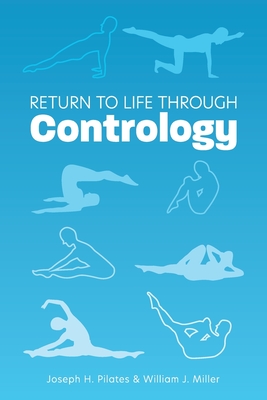 Is it possible to achieve peak physical health without a gym, workout equipment, or even space to run? If the exercise plan in 1945's Return to Life Through Contrology is followed, it may be. Written and compiled by Joseph H. Pilates and William J. Miller, this short exercise book demonstrates a series of movements at the core of what we now call simply "Pilates." Before it became mainstream, the practice was called Contrology, and it was much simpler than its current, equipment-heavy iteration.

Creator Joseph Pilates was born in Germany, a sickly child who suffered from asthma and rheumatic fever, which caused joint and muscle pain. His father introduced him to gymnastics, body-building, and martial arts at a young age, and Pilates devoted the rest of his life to fitness and bodily health.

As a young man, Pilates was a body-builder and gymnast. After immigrating to England in 1912, he earned a living as a professional boxer and circus performer. He also trained police at Scotland Yard in self-defense.

When World War I broke out in 1914, anti-German sentiment reached a fever pitch, and many German citizens living in England were sent to internment camps. Pilates was among them. He spent nearly the entirety of the war as an internee, first at Lancaster Castle and then on the Isle of Man located between England and Northern Ireland.

During this time, Pilates spent his days training his fellow prisoners in wrestling and self-defense. And with no equipment at his disposal, Pilates began to develop his practice of Contrology, focused on bodyweight and mat exercises. Later, he incorporated his simple metal bed into his workouts. It served as an early prototype for his future "Universal Reformer" exercise equipment that brought added resistance to the movements.

After the war, Pilates briefly returned to Germany before immigrating to the United States. During the ocean crossing, he met his future wife, Clara. Once the pair reached New York City, they opened their first fitness studio dedicated to Contrology. Clara, a former nurse, helped her husband to teach students and run the studio. It caught on quickly and included among its devotees famous dancers George Balanchine and Martha Graham. Balanchine brought some of his dancers to Pilates, including young ballerina Romana Kryzanowska who hoped to rehabilitate an injured ankle.

Return to Life Through Contrology, written by Pilates and William J. Miller, includes the original 34 exercises that Pilates taught to his students. The practice focuses on the core muscles in the abdomen, hips, and lower back to increase stability and reduce lower back pain. While some of the postures and movements are similar to yoga poses, Contrology is more strength-based than flexibility-based.

Proper breathing is a central tenet of the practice, with specific instructions accompanying each exercise for inhalation and exhalation. Breathwork in Contrology, similarly to yoga, is a vital part of the movements.

When we think of a modern Pilates studio, we often think of a jumble of platforms, straps, and loops that most of us can't fit in our homes. But the original training required no equipment at all. Based on the exercises that Pilates developed during his time as a prisoner of war, they use only body weight to improve strength and flexibility.

Pilates' philosophy of movement and breath has grown much more popular in the years since his death, with studios opening all over the world. Those who want to understand the foundations of the practice should study the exercises in Return to Life Through Contrology, where they can learn the fundamentals of the movements directly from the master himself.