Making Hong Kong China: The Rollback of Human Rights and the Rule of Law (Paperback) 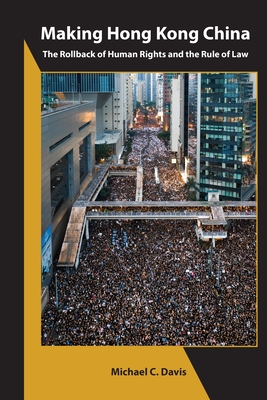 By Michael C. Davis
Email or call for price.

How can one of the world's most free-wheeling cities transition from a vibrant global center of culture and finance into a subject of authoritarian control? As Beijing's anxious interference has grown, the "one country, two systems" model China promised Hong Kong has slowly drained away in the years since the 1997 handover. As "one country" seemed set to gobble up "two systems," the people of Hong Kong riveted the world's attention in 2019 by defiantly demanding the autonomy, rule of law and basic freedoms they were promised. In 2020, the new National Security Law imposed by Beijing aimed to snuff out such resistance. Will the Hong Kong so deeply held in the people's identity and the world's imagination be lost? Professor Michael Davis, who has taught human rights and constitutional law in this city for over three decades, and has been one of its closest observers, takes us on this constitutional journey.

Professor Michael C. Davis is in the Fall of 2020 a Visiting Professor in the Faculty of Law at the University of Hong Kong where he teaches core courses on international human rights. He is also currently a Global Fellow at the Woodrow Wilson International Center for Scholars in Washington DC, a Senior Research Scholar at the Weatherhead East Asia Institute at Columbia University and a Professor of Law and International Affairs at O.P. Jindal Global University in India (where he is in residence each spring). A professor in the Law Faculty at the University of Hong Kong until late 2016, he has held a number of distinguished visiting professorships, including the J. Landis Martin Visiting Professor of Human Rights Law at Northwestern University (2005-6), the Robert and Marion Short Visiting Professor of Human Rights at the University of Notre Dame (2004-5) and the Frederick K. Cox Visiting Professor of Law at Case Western Reserve University (2000). His scholarship engages a range of issues relating to human rights, the rule of law and constitutionalism in emerging states, with frequent publication in such widely read public affairs journals as Foreign Affairs and the Journal of Democracy, as well more mainstream academic journals. He has contributed commentary and analysis to such popular media as the Washington Post, the New York Times, Nikkei, Apple Daily, and South China Morning Post, the latter for which Amnesty International, the Hong Kong Journalists Association and the Hong Kong FCC awarded him a 2014 Human Rights Press Award for commentary.