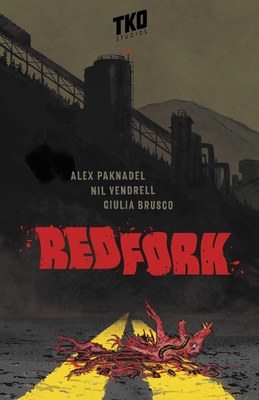 Returning to Redfork, West Virginia with a laundry list of sins to make up for, ex-con Noah McGlade finds his coal mining hometown blighted by opioid abuse, economic decline, and a family that wants nothing more to do with him.

Tragedy seems to follow on Noah's heels, as no sooner does he step foot home that his younger brother is trapped in a mining collapse. But when a mysterious wildcat miner named Gallowglass not only saves his brother, but sets off to restore the town to its former glory, he puts the revitalized townspeople on a collision course with Amcore, the energy giant whose relationship with Redfork runs far deeper than commerce.

There's something terrifying lying in wait in the endless tunnels underneath the town, and it's up to Noah to face his past, and protect the people he loves from forces both human and horrifyingly unnatural.

"Every Paknadel character becomes relatable in some way" - SYFY WIRE "Redfork is a knockout comic book. Both a horror story and a real-life tale of terror, the story injects a great deal of humanity into something that could so easily become caricature" - COMICBOOK.COM "Redfork is a hurricane of horrors about putting faith in the wrong things" - THE BEAT "One of the most frightening and outstanding horror comics published in recent memory" - MONKEYS FIGHTING ROBOTS "Paknadel is a rising star in the field of comics writing" - POP CULTURE SQUAD