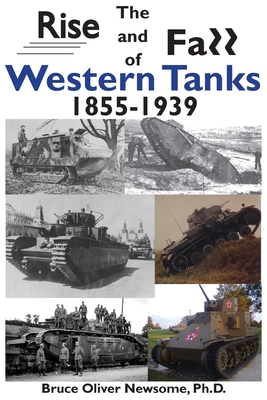 THE RISE AND FALL OF WESTERN TANKS tells the story of how the wealthiest, most industrialized, and most democratic states led the world in tanks from the Great War through the 1920s, but lost their lead in the 1930s. The Soviet Union and Germany (incorporating Czechoslovakia) built the largest tank forces, reverse-engineered Western tanks, and innovated for themselves.

AS THIS BOOK SHOWS, Western soldiers and officials complained at the time, while propagandists pretended otherwise. Western governments deferred official inquiry until peacetime, then they forgot their promises. Politicians spun the story to avoid blame or monopolize credit. Official historians ignored the record. Private historians nationalistically and lazily followed suit.

IN THIS BOOK, you can read what the developers and users said at the time, illustrated with more than 200 photographs and 14 graphs and tables, based on a dataset with more than 500 tank types, across 9 countries - from gun size to cost, from Canada to Japan, from the First World War to the Second.

THE RISE AND FALL OF WESTERN TANKS combines history and science to resolve a controversy that has endured for almost a century.