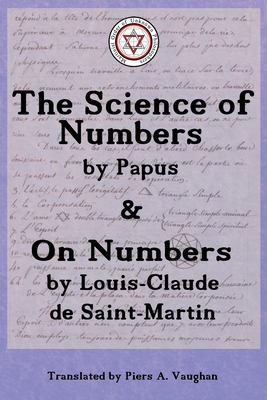 The study of numbers from a philosophical, mystical or theosophical viewpoint has been pursued since the dawn of man. Many are familiar with the mapping of the Hebrew alphabet onto numbers to identify words which have an affinity with one another, for interpeting the Scriptures, and most particularly in gaining an understanding of the Kabbalah. Similarly, the importance of numbers has been emphasized by alchemists, astrologers, theurgists and numerologists through the centuries, and it forms a key part of the syllabus of the Hermetic Order of the Golden Dawn, among other Orders.

One such school is Martinism, which takes much of its teachings from the extraordinary system of Martines de Pasqually, the founder of the Masonic-Theurgic Order of Elect Cohens of the Universe. His book, 'Treatise on the Reintrgration of Beings', presented a theosophy based on numbers, drawing heavily from the Book of Wisdom: "Thou hast ordered all things in measure, and number, and weight." Saint-Martin continued to emphasize the importance of numbers in his several books, and devoted an entire tract to the subject, 'On Numbers', which was published posthumously. One hundred years later Papus (Dr. G rard Encausse) assembled a book entitled 'The Science of Numbers', which was also published posthumously following his untimely death.

These two seminal books on the subject are now offered in English for the first time, with over 300 footnotes explaning the sources of the ideas, and assisting the reader to understand the extraordinary world of Martinist numerology and the concept of theological mathematics.