FINANCING INDEPENDENT FILMS, 2nd Edition: 50 Ways to Get the Golden Goose, not a Goose Egg (Paperback) 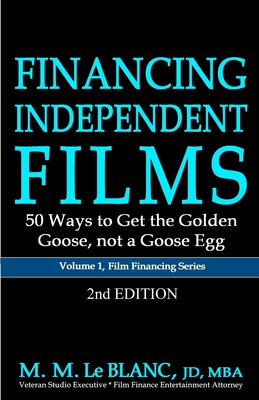 This MUST-HAVE film financing book provides 50 ways for filmmakers, producers, directors, actors, film students and film instructors to utilize in raising money to finance a film, lower the budget and bring the project to fruition.

Bonus information include a checklist of all 50 ways to finance a film, over 175 film resources, information on preparing a chain of title, details on options and acquisitions of literary material for a film, sources of grants, information on distribution, how to make deals and obtain reversionary rights, as well as securities exemptions as a method to raise film funding.

The author has been a veteran Hollywood film and television studio/network executive and international entertainment and film financing attorney, and worked on hundreds of films and procured certifications for tax credit financing (one of the 50 Ways) for over a Billion Dollars of productions.

By utilizing the easy-to-read techniques and methods explained in simple non-legalese, anyone seeking financing to make a film, whether independent or feature, whether the first one or another in a long line, filmmakers will gain invaluable knowledge to bring the project to fruition in the most cost-effective and expedient way possible.