A Tradition of Rupture (Paperback) 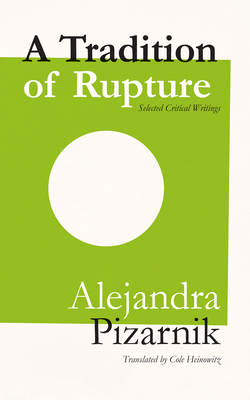 Literary Nonfiction. Essays. Latinx Studies. LGBTQIA Studies. Women's Studies. Translated from the Spanish by Cole Heinowitz. Since the publication of her 1955 debut poetry collection, La tierra m's ajena (THE MOST FOREIGN COUNTRY), Alejandra Pizarnik has captivated the imaginations of many of Latin America's most celebrated twentieth-century writers, from Octavio Paz and Julio Cort zar to Roberto Bola o and Ra l Zurita. Over the last several years, the majority of Pizarnik's poetry has been translated into English, garnering enormous acclaim in the U.S. and abroad, yet her extraordinary critical writings--including commentaries on figures such as Artaud, Borges, Breton, Michaux, and Pessoa, as well as intimate accounts of her own working methods--remain almost entirely unknown outside the Spanish-speaking world. A TRADITION OF RUPTURE makes these writings available to English-speaking readers for the first time, offering indispensable insight into the range of Pizarnik's reading and the principle influences on her poetics. The works collected in this volume also provide a rare glimpse of the famously introverted poet in her capacity as public intellectual and critic, revealing a voracious intelligence turned outward toward the world in vital dialogue with the words of others. For many years now we have known Alejandra Pizarnik as a poet who explored the mysteries of pain & mental suffering in a mode & at a level like that, say, of Kafka, & still more that of Artaud. What her translator Cole Heinowitz now brings us so forcefully is a sampling of Pizarnik's poetics & critical writings, as a further & necessary record of what it means to claim a life through poetry. Simultaneously subversive & tragic, hers is a full-blown work that cries for our attention.--Jerome Rothenberg.