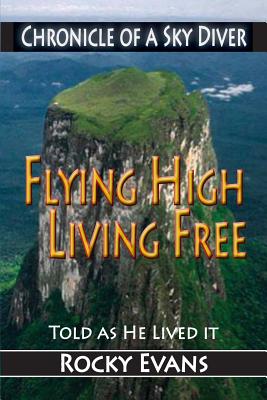 Rocky Evans is a National and World Champion skydiver, a highly skilled pilot, and a co-developer of the Accelerated Freefall Training Program. One of the early legends in skydiving, Rocky Evans is no choir boy, but when he's in the air he is as pure as they come. But this is not just Rocky's story, it is an open window on the untamed early days of skydiving. Death is no stranger in this narrative. Flying High, Living Free includes harrowing tales like the BBC expedition onto the flat-top mountain called Autana in the depths of the South American jungle, and Rocky's role in a Russian skydive expedition to the North Pole. The story is told in Rocky's own words. As he says, he never lost a student as a skydive instructor, and never lost a passenger as a pilot, but he came so close and many times put in his own life in danger in the process. This is both a personal story and an insider's view of an exciting sub-culture known as skydiving.

HIGHLIGHTS FROM THE PERSONAL CHRONICLE OF A SKY DIVER:
There I was--freefalling at 120 mph, dropping through 500 feet above the ground. My main parachute had malfunctioned and I was sure this was the end ... I only wondered if the impact was going to hurt.

With five sky divers onboard, my Cessna 206 was working perfectly. Once airborne I brought the flaps up and began to pick up airspeed. Then, at the end of the runway, a massive explosion shook my engine. Then silence. We are at 300 feet with nowhere to go but down.

I was amazed at the silence as we lifted off in the oversized hot air balloon with six smiling passengers in the basket. But within moments the nervous pilot announced an early landing. As he dropped down, the power lines came closer and closer. Were we going to hit them? Oh God A huge electrical explosion filled the air with flames. I was sure we were all about to die.