Tawdry Tales and Confessions from Horror's Boy Next Door (Paperback) 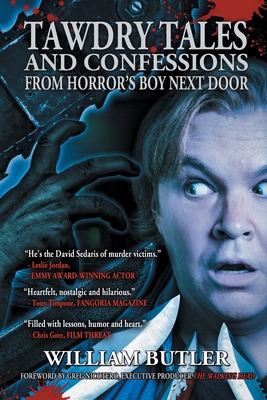 By William Butler, Greg Nicotero (Foreword by)
Email or call for price.

In the last 40 years, actor, director and former effects artist William Butler has easily lived three lifetimes. From his early beginnings creating super-8 horror shorts and working the circus midway to a blissful existence as a producer-director living in the Hollywood hills, he's seen it all, gained it all and... lost it all.

Tawdry Tales chronicles the jaw-dropping, sometimes hilarious, sometimes heartbreaking life of an industrious young artist who started out with an unflinching determination to work in film and who somehow became "Horror's Boy Next Door", appearing in dozens of movies alongside the genres most legendary villains, including Jason Vorheees from Friday the 13th, Leatherface from the Texas Chainsaw Massacre the George Romero's zombies from Night of the Living Dead. Butler chalks it all up to having a face you just want to hit with a butcher knife.

Butler lovingly has transcribed 35 years-worth of journals he kept into one fascinating and heartfelt memoir that follows his story around the world as he worked with and in some cases lived with some of Hollywood's most beloved and "colorful" personalities including Viggo Mortensen, Leslie Jordan, Tom Sizemore and the legendary Prince.

- The true story of how the sequels Return of the Living Dead 4 and 5 went so horribly wrong.

- The raw ugly truth of what it's really like to be a director of small movies for big companies.

- Unfiltered tales from his 35 years of production with Charles Band

- Dozens of never before seen behind the scenes photos.