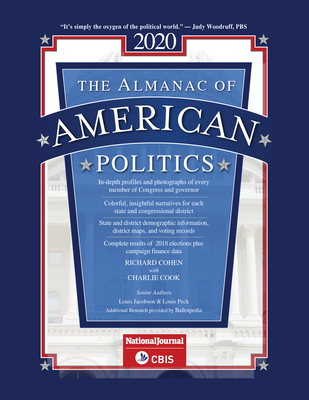 By Columbia Books Inc (Editor)
Email or call for price.

The 2020 Almanac of American Politics remains the gold standard of accessible political information, relied on by everyone involved, invested or interested in politics in America. Highly regarded for its in-depth analysis and comprehensive profiles of every congressional district, state, governor and member of Congress, The Almanac is the tool you need to better understand the context of the people and perspectives shaping the issues that matter to you. The Almanac of American Politics is the must have resource for understanding the American political landscape. The 2020 edition includes: -In-depth profiles of every governor, Senator, and House member. -As in previous editions, the 2020 Almanac includes profiles of every member of Congress and every governor; in-depth and completely up-to-date narrative profiles of all 50 states and 435 House districts -- covering everything from economics to history to, of course, politics. -Profiles of Donald Trump and Mike Pence by Michael Barone. -Political overview by Charlie Cook -Essential reference and contact information. -A refreshed and updated layout -Vital Statistics on Congress data tables provided by The Brookings Institute -Updated demographic information for every state and district, including information from the Census Bureau's American Community Survey, with new categories of economic, occupational, social and geographic data. -Census data featuring: Updated veteran status data- New healthcare data including the rate of insured vs. uninsured in each congressional district New public assistance data - Analysis of the 2018 elections for Senate, House and governor races, and how those results shape the public policy debates in Congress and the nation. - A breakdown of the votes cast for President in 2016 for all states and districts, including primaries. - Campaign finance data for all Senators and House members--plus their challengers--in the most recent election, including all-new listings of the "outside money" spent in those contests. - Analysis of voter turnout in each state and congressional district for the 2016 presidential elections. - More than 60 state and congressional district maps, the key votes cast by members of the House and Senate, interest group ratings, and more. - "Almanac Vote Ratings" on congressional members - Vital Statistics on Congress data tables provided by The Brookings Institute - All new: Lists of Statewide Elected Officials - All new: Updated voter registration data.

Richard E. Cohen was co-author of The Almanac of American Politics from 2001 through 2010. He has written about Congress for National Journal, Politico and Congressional Quarterly. He is the author of several books, including Washington at Work: Back Rooms and Clean Air, a case study of the 1990 Clean Air Act, and Rostenkowski: The Pursuit of Power and the End of the Old Politics. He recently co-authored The Partisan Divide, with former Reps. Tom Davis of Virginia and Martin Frost of Texas. In 1990 he won the prestigious Everett McKinley Dirksen Award for distinguished reporting on Congress. James A. Barnes is a senior writer for Ballotpedia.org and consultant to CNN projecting the outcomes of presidential, congressional and gubernatorial races for its election night and primary night coverage. He was formerly the chief political correspondent for National Journal magazine and founder of the National Journal Insiders Poll. He is co-author of "Public Opinion among Political Elites: The Insiders Poll as a Research Toll" in The Forum: A Journal of Applied Research in Contemporary Politics, 2013; and contributor to The State of American Politics (Rowman & Littlefield, 2001). Charlie Cook is Editor and Publisher of the Cook Political Report and a political analyst for National Journal magazine, where he writes a twice weekly column. Charlie is considered one of the nation's leading independent and non-partisan authorities on American politics and U.S. elections. In 2010, Charlie was a co-recipient of the American Political Science Association's prestigious Carey McWilliams award to honor "a major journalistic contribution to our understanding of politics." For the Spring semester of 2013, Charlie served as a Resident Fellow at the Institute of Politics at the Kennedy School of Government at Harvard. Michael Barone is Senior Political Analyst for the Washington Examiner and a Resident Fellow at the American Enterprise Institute. He is a contributor to Fox News Channel and co-author of The Almanac of American Politics 1972-2016. He is also the author of Our Country: The Shaping of America from Roosevelt to Reagan, The New Americans: How the Melting Pot Can Work Again, and many other publications in the United States and several other countries. Mr. Barone received the Bradley Prize from the Lynde and Harry Bradley Foundation in 2010, the Barbara Olsen Award from The American Spectator in 2006 and the Carey McWilliams Award from the American Political Science Association in 1992. About the Data Editor: Keating Holland was Director of Polling for CNN from 1993 until his retirement in 2014. He also supervised the network's decision desk on election nights as CNN's Director of Election Analysis from 2006 to 2014. During that time, Mr. Holland won two Emmys and a Peabody Award. To date, Mr. Holland has visited 423 of the 435 congressional districts in the United States.