A Journey to Find the Cuckoo: A Heroic Legend about Exploring the Secret of the Four Seasons (Hardcover) 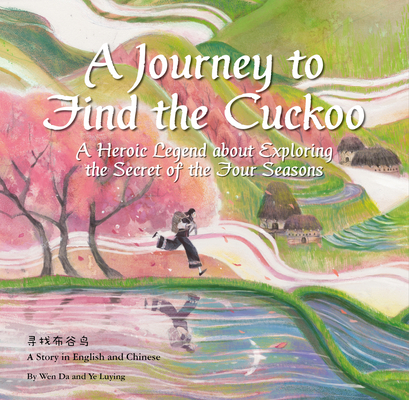 There used to be a small village on the mountain. The villagers there cannot tell the seasons and are unable to farm successfully. A young man named Aluo decides to go and look for the legendary cuckoo who could tell the seasons by himself. Along the way, Aluo helps a frog and feeds a rooster. Aluo’s kindness touches their hearts. They decide to help Aluo find the cuckoo. They find the Red River Goddess who tells them that the cuckoo lives in the golden bamboo forest in the sky. She gives them a golden leaf, which can be used to call the cuckoo. She also warns them that one of them might even be killed. However, they are not frightened by the difficulties ahead of them. They manage to fly into the sky with their intelligence, and enter the golden bamboo forest after they help the old cattle finish ploughing the endless fields with their creativity. While Aluo is whistling with the golden leaves in the golden bamboo forest, the brave, kind, and wise Aluo turns into a divine cuckoo bird. As he protects his beloved hometown, the villagers are able to farm based on seasons and live good lives with years of harvests.

Graduated from China Academy of Art and Oslo National Academy of the Arts, Ye Luying is an illustrator, picture book author, and designer. She has won numerous awards, including the gold award of the illustration category from the 13th China Animation Golden Dragon Awards and the gold award of the Golden Pinwheel Young Illustrators Competition at the Shanghai International Children’s Book Fair.