The Book of Giants: The Watchers, Nephilim, and The Book of Enoch (Paperback) 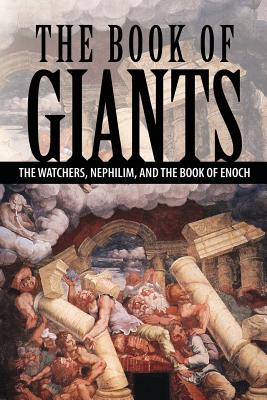 The Watchers were a group of Angels tasked with recording the deeds and progress of humankind. These Angels left their heavenly post and came to earth to experience the fleshly realm. One of the first actions of the Fallen Angels was to breed with human women. The offspring of these fallen, rebellious spirits and human females were hybrids, referred to as the Giants, the Nephilim (meaning "The Fallen Ones"), and the Men of Renown. Among the first seven scrolls discovered in the caves of Qumran at the Dead Sea is a scroll given the name, "The Book of Giants." It records this history and is thought to have been based on the Book of Enoch, a pseudepigraphical Jewish work from the 3rd century BCE. The Book of Giants, like the Book of Enoch, concerns itself with the Watchers and their evil offspring. Two main versions of the text exist. The Dead Sea version is written in Aramaic. Another version has been found written in middle Persian, adapted from the Aramaic to fit into the Manichean religion. Both versions will be examined. Following theories speculating that the Book of Giants was once part of the Book of Enoch, we will attempt to place the two texts back together to render the complete story of the Watchers and the Nephilim. We will discover the history and contributions of these ancient scrolls and look carefully at their content and meaning. Throughout the combined texts we will examine all the biblical and apocryphal references and parallels within the text. The result is an in-depth and panoramic view of the Angels, the Watchers, and the Nephilim, and how one of the giants of the Nephilim race may have survived the flood intended to cleanse the Earth of their horror.

Joseph Lumpkin has a long and varied background in research and writing. He worked in research and development within the U.S. Department of Defense for many years. Major projects included Hypersonic Missile Technology and Computer Clustering for Super Computers. In addition to his background in science, computers, and research, Joseph has a Doctorate of Ministry and has acted as chaplain to several outreach programs. He has written for various newspapers and has authored over two dozen books on subjects of theology, religion, history of Christianity, and philosophy. Dr. Lumpkin has appeared on Radio, Television, and Internet shows as a guest speaker on subjects of Fallen Angels, Church History, Religion, Theology, The Sacred Feminine, and the Axial Age. Shows include L.A. Talk Radio, Rainmaking Time, Cryptic Knowledge, and Threshing Floor Radio. Access shows via http: //www.fifthestatepub.co