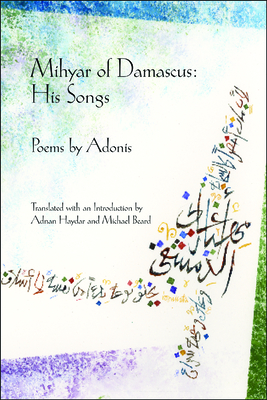 Born in Syria in 1930, Adonis later moved to Lebanon and became a pivotal figure in the new poetry of the late 1960s. With the publication of Mihyar of Damascus: His Songs in 1963--widely viewed as a watershed moment in Arabic poetry--Adonis forged a new set of possibilities for Arabic poetry, writing in traditional meters but infusing them with modernist rhythms, styles, and conceptual complexities.

Adonis is arguably the leading Arabic poet in the world. Born in Qassabin, Syria, Adonis studied philosophy in Beirut, where he obtained his Doctorat d'Etat in 1973. After his arbitrary imprisonment for six months in 1955 for political activities and membership of the Syrian National Socialist Party, he settled in Lebanon in 1956, later becoming a Lebanese national. Adnan Haydar is head of the Arabic section in the department of foreign languages and professor of Arabic and comparative literature at the University of Arkansas, where he also directed the King Fahd Middle East Studies Program from 1993 to 1999. He has edited numerous modern Arabic novels in translation for Syracuse University Press. Michael Beard has been a member of the University of North Dakota faculty since 1979. He is a regular consultant to the NEH. In 1996 he received a Fulbright Fellowship to teach at University of Jordan. He has been a visiting professor at American University in Cairo, Egypt, and published nearly 100 articles and reviews on Middle Eastern literature.