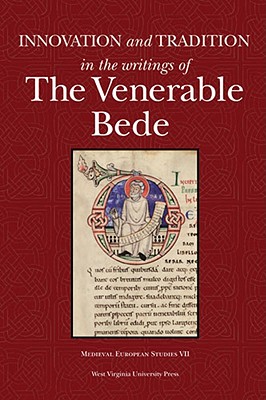 Works prior to this book focused on Bede as not only a European, but also as an English scholar, historian, scientist, or a biographer of saints, and have used a traditional approach towards his explanation of the Bible. Bede's interpretation of his work, its continuous progress, and the reasons behind his hurried appointment to an authority almost as high as the Church Fathers are all topics examined within the text. Essays are by Roger Ray, Faith Wallis, Calvin B. Kendall, George Hardin Brown, Scott DeGregorio, Arthur G. Holder, Lawrence T. Martin, Walter Goffart, and Joyce Hill.

Scott DeGregorio is Professor of Medieval Renaissance, Classical, and Biblical Literature at the University of Michigan-Deerborn. Besides Innovation and Tradition, he has also been involved with Bede: On Ezra and Nehemiah and Bede, the Monk, as Exegete: Evidence from the Commentary on Ezra-Nehemiah, among others.

"Innovation and Tradition in the Writings of the Venerable Bede demonstrates the vitality of current scholarship and testifies to a remarkable unity in diversity of critical perspectives on Bede the exegete, "scientist," social reformer, and pedagogue, as well as historian. The Bede who emerges from these new essays was a leading light not only of early England, but also of medieval European culture at large."
Christopher A. Jones, Ohio State University

"This collection of essays (together with an excellent, up-to-date bibliography running to over thirty pages) is testament to the strength and vitality of Bedan studies."
Deborah McGrady, Speculum