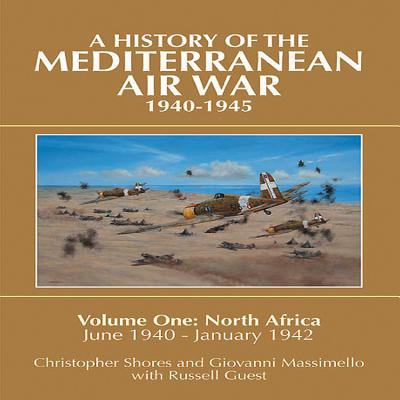 By Christopher Shores, Giovanni Massimello
$75.00
Email or call for price.

It is now more than 40 years since Fighters over the Desert was published, and nearly as long since this was followed by Fighters over Tunisia. Both volumes have long been out of print and collectors' items, but, despite much prompting, Christopher Shores has resolutely refused to permit their reprinting until he amassed so much more information. He has also long nursed a desire to expand the coverage to encompass the operations of the other types of aircraft involved in this interesting and important theater of war - the bombers, reconnaissance aircraft and maritime units. Further, it is his intention to extend the period covered to include the later operations over Sicily, Italy, the Aegean area, the Balkans and Southern Europe.

This then represents the first volume of a seminal series dealing with all these aspects and areas, which will also tie in with the earlier Grub Street volumes which he and his collaborators have produced. Thus a full coverage of all aspects of aerial operations throughout the whole of the Mediterranean area will be the ultimate result. Further, these volumes will link appropriately and directly with his other works of this nature, dealing both with the Far East and the war in Europe.

Readers will then be able to follow the wartime careers of units and personnel involved from volume to volume throughout the war. Operations directly over the main battlefronts will be dealt with as previously, on a daily basis. However, to allow a clearer view to be obtained of operations elsewhere in the theater, or of a different nature, separate chapters will deal specifically with the night bombers, the air defense of the base areas, and the naval co-operation activities. Wide use of maps will be made throughout this and subsequent volumes together with a considerable number of photographs integrated into the text. Long awaited by many, if any work can be said to be comprehensive and definitive, this is it.

Christopher Shores served in the ATC and RAF during the 1950s and produced his first book in 1966. Since then he has produced an average of one book per year on aviation subjects, plus many articles, aircraft monographs, and similar works. By profession a chartered surveyor, Christopher Shores worked in the commercial property market for more than 40 years. Retired in mid 2000, he continues to be a consultant, but is now able to devote much more of his time and energy to aviation research and writing. He lives in Dorset, England.