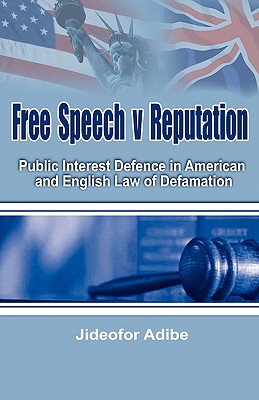 Free speech is increasingly recognised as a universal human value, even though its application differs in different jurisdictions. Free speech is however never absolute, even in jurisdictions like the USA, where the First and Fourteenth Amendments give it special protection. The main reason why free speech cannot be absolute is because it competes with other equally important human values such as the right to privacy, reputation or to protect societies from potential harms from unresrtrained hate or obscene speech. In this study the author looks at how free speech interests are balanced against the need to protect reputation in American and English defamation laws. Cases from both countries are studied to see how this tension is resolved. Special attention is given to 'public interest' defence since the media often justifies its attack on reputation on 'public interest', even when it is substiuting its own interest for this 'public interest'. The premise of the study is that while freedom of the press is desirable and cherishable, it is important that the individual is recognised as the foundational block of human rights and the democratic process, who is entitled to his reputation as part of his human dignity. If the notion of human rights is necessarily anti-majoritarian in principle, it means that cases in which the press uses public interest defence to attack reputations require close analyses to ensure that both the individual and the public good are equally protected.

Four cases in the US are examined: New York Times v Sullivan (involving a public official), Curtis Publishing Co. v. Butts (involving a public figure), Time Inc v Hill (involving a private individual who was transformed into a public figure against his will), and Monitor Patriot v Roy (involving a candidate for a political office). In the UK: Derbyshire County Council v Times Newspapers Ltd. and Others (involving a local authority, which sued for libel), Reynolds v Times Newspapers Ltd (involving a politician), and George Galloway v Telegraph Group Ltd (involving a controversial politician who was famous for opposing the Iraq war and the UN's sanctions against the country - both supported by the defendant newspaper). In all these cases, 'public interest' figured prominently as one of the defences by the accused media house. But what is the notion of 'public interest' espoused in the these cases? And does it sufficiently protect both the public good and the individual?