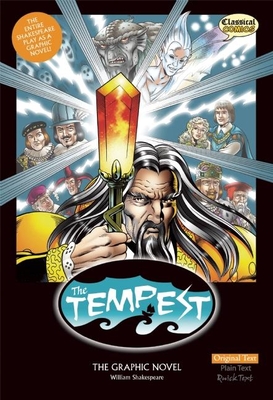 Cast onto the waters by his power-hungry brother Antonio, Prospero, the Duke of Milan, has been living on a distant island for a dozen years along with his daughter Miranda. In his years of banishment, Prospero has developed strong magical powers -- powers that not only allow him to deduce that Antonio is on a nearby ship, but to cause the ship to run aground. At long last, Prospero has a chance to get revenge on those who have wronged him. But, will he also ruin Miranda's chance for happiness? The Tempest is considered by many critics to be Shakespeare's crowning glory. This full-color graphic novel presents the sparkling romantic comedy just as Shakespeare intended: in its original and unabridged format, and in its original setting. As with the other titles in this well-received series, it encourages readers to discover classical literature while staying true to Shakespeare's vision. Also available are a Plain Text version, translated into modern U.S. English, and a Quick Text version, with less dialogue for a fast-paced read.