Echolalias: On the Forgetting of Language (Paperback) 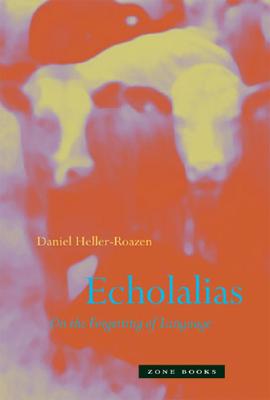 By Daniel Heller-Roazen
$22.95
Email or call for price.

A far-reaching philosophical investigation into the persistence and disappearance of speech, in individuals and in linguistic communities.

Just as speech can be acquired, so can it be lost. Speakers can forget words, phrases, even entire languages they once knew; over the course of time peoples, too, let go of the tongues that were once theirs, as languages disappear and give way to the others that follow them. In Echolalias, Daniel Heller-Roazen reflects on the many forms of linguistic forgetfulness, offering a far-reaching philosophical investigation into the persistence and disappearance of speech. In twenty-one brief chapters, he moves among classical, medieval, and modern culture, exploring the interrelations of speech, writing, memory, and oblivion.

Drawing his examples from literature, philosophy, linguistics, theology, and psychoanalysis, Heller-Roazen examines the points at which the transience of speech has become a question in the arts, disciplines, and sciences in which language plays a prominent role. Whether the subject is Ovid, Dante, or modern fiction, classical Arabic literature or the birth of the French language, structuralist linguistics or Freud's writings on aphasia, Heller-Roazen considers with clarity, precision, and insight the forms, the effects, and the ultimate consequences of the forgetting of language. In speech, he argues, destruction and construction often prove inseparable. Among peoples, the disappearance of one language can mark the emergence of another; among individuals, the experience of the passing of speech can lie at the origin of literary, philosophical, and artistic creation.

From the infant's prattle to the legacy of Babel, from the holy tongues of Judaism and Islam to the concept of the dead language and the political significance of exiled and endangered languages today, Echolalias traces an elegant, erudite, and original philosophical itinerary, inviting us to reflect in a new way on the nature of the speaking animal who forgets.